Currently, it is very difficult to speak of anything but the low interest rates affecting savers and investors. At the time of writing1, the Reserve Bank of New Zealand has taken a breather with its September 2019 announcement and left the Official CashRate(OCR)at 1.00%.After the hefty movement of 0.50% “south” on August 7, this is welcomed in most sectors.

The OCR influences the price of borrowing money in New Zealand and provides the Reserve Bank with a means of influencing the level of economic activity and inflation. An OCR is a conventional tool by international standards.2 However, for many, it is seen as a blunt instrument that has far wider consequences. This includes directly affecting deposit rates, especially at main street banks.

Banks use domestically raised capital (term deposits) to help fund their lending book. Therefore, “the spread” between their deposit rates and their lending rates is effectively the margin off which they operate. This revenue, as well as transactional fee and service fee revenue, is the primary source of their well-published profits.

We, therefore, rely on competition in order to be able to shop around for better deals, but as rates remain so low, the main banks are starting to look rather homogenised.

It was widely reported3 recently, that the Financial Markets Authority (FMA) has found a further decline in interest rates on bank term deposits is causing more savers to consider alternative investments.

The financial watchdog said a survey of 195 term-deposit holders in August suggested 43 per cent were likely to invest less in term deposits because of low interest rates. Of those who were considering changing their investment strategy, a quarter were considering shifting savings in search of better returns.

Certainly, in our organisation, we are seeing a steady increase in queries about deposits as investors search for regular income and quality yield, without being locked in. More so than ever, investors and savers are asking questions about quality, liquidity and generally, “what do you do with my money”? I find this heartening, as for me it seems the message is filtering through that yield is important, but quality, management and liquidity are all factors that need to be considered.

Even though there is a search for yield, the preservation of capital is front of mind, as it should be.

The low-interest rate environment is currently forecast to continue, with little sign of an end any time soon. Investors and savers can no longer wait “for things to get better”. Mainly because the outlook is that it won’t, any time soon.

Like an English tabloid paper’s perpetual exploration of tacky metaphors, I read4 with great amusementthat the moniker “shock and Orr” is starting to be used.

Certainly, Reserve Bank Governor Adrian Orr (above) has ingrained himself in the financial services psyche of New Zealand. In a previous profession, I remember clearly learning of “shock and awe” in military doctrine with the words “overwhelming force from the outset” still ingrained in my mind 25 years later. In Mr Orr’s case, this cap certainly fits.

In my opinion, he’s a strong and bold Governor, not only for his large cut of the OCR in September, but also for his continued statements regarding bank conduct and all things economy. I am excited by the fact that we have visible economic leadership in New Zealand. The Reserve Bank Governor should be a “front of office” role. For this, personally, I applaud him.

Therefore, moving forward, we should watch Mr Orr with a deep fascination. He must navigate the country through what is largely uncharted waters. Interest rates are historically low and are forecast to remain so. The OCR is a blunt instrument and the biggest trick in his bag of tricks. I wonder how often he dares to play it.

One thing is for sure, this Governor is probably not offended by the term “shock and Orr”. He may even like it… 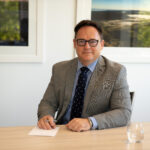 Tobias Taylor is a Director and Wealth Management Adviser at Jarden, New Zealand’s leading investment and advisory firm. He has worked in banking and financial services for more than 20 years in London, Wellington and Hawke’s Bay. Tobias is a board member of Presbyterian Support East Coast. He is a NZX Adviser, Certified Financial Planner (CFP), a member of Financial Advice New Zealand (FANZ) and the New Zealand Institute of Directors (IoD). Find out more about Jarden’s Hawke’s Bay team here - https://www.jarden.co.nz/our-services/wealth-management/