The path to getting to the major milestone has had more turbulence than a flight into Wellington on a stormy day, and as the airport’s chief executive Stuart Ainslie says, the adversity has created a more resilient airport as well as a stunning gateway to the Bay.

He arrived in March 2018 armed with an impressive international CV, including more than 16 years’ experience working in public and privately-owned hub and regional airports in the United Kingdom, Australia and Papua New Guinea (PNG). 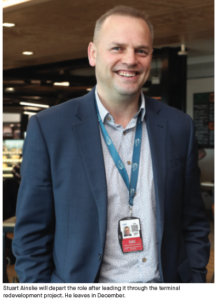 His last gig prior to jetting into Hawke’s Bay was as the executive general manager for Port Moresby International Airport, the main gateway into PNG,

where he led the terminal expansion in time for the 2015 Pacific Games and APEC 2018.

With this background, Stuart probably believed he had experienced most challenges that could come his way. However, nothing could prepare him for what was to unfold over the next three years.

“The vision back in 2018 was to create a vibrant airport and we’ve delivered that, but I never thought for a minute that we would be hit by three significant events in the process,” he says.

Firstly, the project was struck by the liquidation of its lead construction firm Arrow International in February 2019; followed by the exit of air carrier Jetstar Airways in late September; and in March 2020, the global pandemic of COVID-19 brought not only flying in and out of the airport to a halt but also the construction project.

“I didn’t sign up to that but in retrospect, with Arrow out of the picture, we were able to create an airport subsidiary company to act as the construction project lead, which has been hugely successful, supporting many local construction, supplier and consultant firms.

“If we had gone to market for another construction lead, there could have been a longer delay in getting the project back up and running and by the time COVID-19 hit, we would have run into other challenges. This way we had much more control.”

It also cast doubt on when the airport would ever return to the year-on-year record passenger capacity it was experiencing and the forecasted one million passengers a year by 2025.

Passenger numbers fell to 541,087 and it could have been worse hit, yet Stuart and the board pushed forward with the expansion project, backed by the support of a $9 million loan facility (inclusive of a $2 million contingency) from shareholders the Crown, Napier City Council and Hastings District Council.

The loan facility gave the company the headroom it needed to continue the terminal construction and working capital to support the business through the COVID-19 recovery period.

Stuart says it’s a credit to the hard work of the airport team that the loan was never needed to be called upon.

“Financially we are in a different place than we forecasted due to COVID-19, which was a $1.5 million loss, and we’ve landed with a net profit of half a million dollars with revenue up six percent on last year, and that’s a great result since passenger numbers fell by 300,000.”

Stuart’s international experience also came to the fore early in his appointment when he asked the board to consider a review of the scope, scale and internal finishes of the terminal. 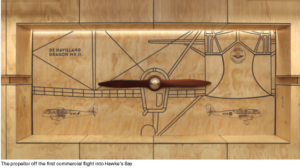 He did this without knowing of the turbulence ahead, basing his vision on his international experience.

“That review has created an airport that has ambience and we’ve partnered with Mana Ahuriri to create a strong cultural sense of place, which we have achieved in leaps and bounds and there’s more to come.

“The look and feel, offering and choice are night and day ahead of what the airport previously offered.”

Stuart admits that the $24.5 million terminal expansion took longer than hoped but the region has been rewarded with a magnificent gateway that celebrates the cultural significance of the Ahuriri area and the wider Hawke’s Bay region. 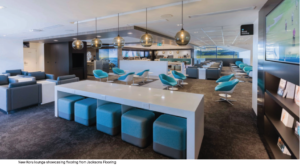 He says the finished product has been achieved thanks to a small but dedicated Hawke’s Bay Airport team as well as many dedicated local individuals and businesses that have taken immense pride in creating a new terminal.

“Our team has been living in a construction site for three years with reduced amenities but we all had a clear vision and it has come to fruition. We love seeing the smiles on people’s faces when they visit for the first time.

“The team, which is pretty lean, has gone through a lot of change and uncertainty and it has been a real test of their resilience and I’m very proud of them.”

Many other local businesses and individuals have played key roles in the development such as Lattey Group, Jacksons Flooring, Panton Plumbing, Red Steel and Mitre10 Mega, through to local treaty group Mana Ahuriri, who provided cultural input alongside well-known artist Jacob Scott.

The finishing touches including the forecourt are underway, again hit by supply challenges resulting from the second full COVID-19 lockdown. Most of the internal work is complete, with the external experience to be completed in time for summer visitors.

Visitors will arrive from the carpark and will enter the building under a timber waharoa (gateway) symbolising the beak of the kuaka that live nearby.

An expansive foyer leads to a central space that hosts new retail and hospitality spaces, including a Bay Espresso café and Roosters Brewery bar, which is flanked by the arrivals and departure lounges. 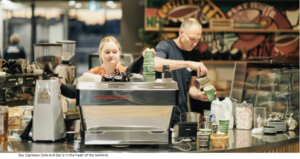 The central hospitality space features luxurious bathrooms and a large viewing mezzanine for friends and family to await their visitors. A children’s play area is planned and installations that tell Hawke’s Bay stories make this a destination visitors will want to spend time in.

Stuart says every effort has gone into making this a space local people will want to welcome their visitors to or arrive home to.

“We are most proud of the way we’ve been able to work with Jacob Scott, Mana Ahuriri and other key partners to tell our cultural and heritage stories throughout the space – but rather than describe them I’ll let visitors experience them for themselves when they visit. It’s simply stunning.”

Air New Zealand has invested heavily in a new regional lounge upstairs offering healthier food, more space and a dedicated café that caters for around 130 guests – almost double the seating capacity than the previous space.

“We know our customers travel for a myriad of reasons: those travelling for business may want a quiet space to get some work done before flying; others to sit, relax and enjoy a pre-flight drink. This insight was at the heart of the new lounge design.

“Hawke’s Bay is proving a popular corner of the country, it’s the perfect time to open the doors and welcome customers to our new lounge space.”

As Stuart takes in the new terminal and reflects back on the past three years, he points to the cultural and aviation heritage that’s been captured as well as the region’s hallmarks for food and wine experiences. 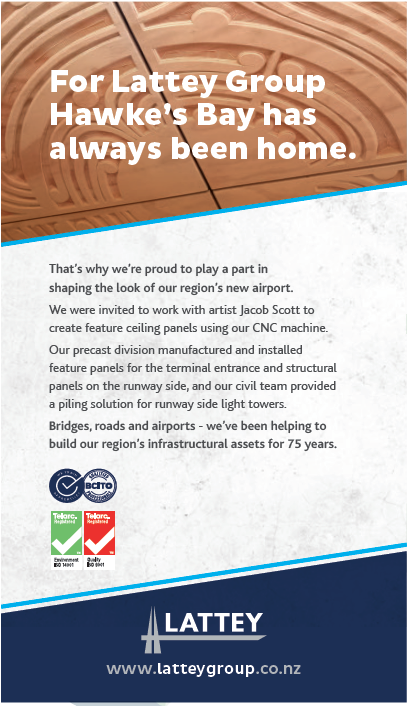 He says there’s more to come, especially in how the airport promotes Hawke’s Bay’s food and wine in ways that travellers can enjoy and engage with

One surprising addition that has been welcomed by many is the old propeller that was dusted off by The Hawke’s Bay Aviation Heritage Association, who suggested that it be a feature of the terminal.

The original wooden propeller was from the first commercial flight into Napier. The plane, a 1930s De Havilland Dragon MK2 landed at the airport in 1935. It was then put into service in World War II in Fiji and the propeller is the only surviving piece .

Hawke’s Bay Airport and the Hawke’s Bay Aviation Heritage Association worked closely with George Williams from local company Blackdog Design on the concept and design for the display that houses this special artefact, creating a plywood installation that uses negative detailing to form line drawings of the De Havilland. 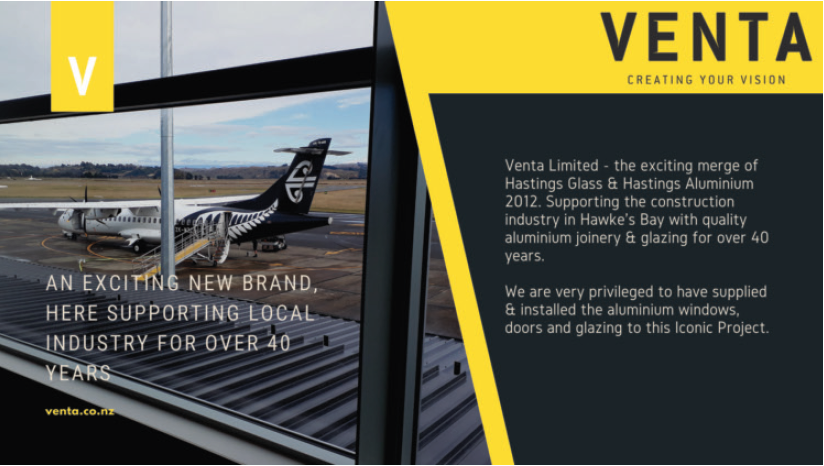