Pallets and bins may look simple to build but for one of New Zealand‘s largest manufacturers, Tumu Timbers, there’s a level of sophistication that’s getting the best from what others would regard as the off-cuts.

Tumu Timbers, based in Irongate Maraekakaho, has been supplying a range of pallets, bins, wooden packaging and timber products to a wide range of industries since the early 80s. The business – part of the TUMU Group of companies, some of which are neighbours – is set out across the nine-hectare site.

In the early days the construction process was manual – from the grading of timber through to hammering the pallets together – yet today the constantly growing facility uses computer software, digital grading scanners, automated assembly lines and a trial is about to get underway involving robotics.

Jobs are safe however; although technology is helping increase productivity, staff numbers have grown over the past eight years from 80 to 150.

Tumu Timbers general manager James Truman and operations manager Andrew Cranswick can easily reel off the statistics but as impressive as they are, they’re also focussed on ensuring the 150 staff and their families are part of its success.

In terms of productivity and reliance on the core material – pinus radiata – Andrew easily rattles off the impressive numbers.

He says about 10 truck and trailer units transport timber to site every day. “Or if we laid timber end to end, it would stretch the distance from here to Australia seven times a year, that’s 40 to 50 kilometres of timber a day,” he says.

In finished product, Tumu Timbers builds approximately 800,000 pallets and between 50,000 to 100,000 bins each year. Of the 800,000 pallets (which are used mostly for the apple, kiwifruit and industrial sectors), 75 percent are exported across the world. If pallets produced were stacked on top of each other they would reach the heady heights of Mount Everest every four to five weeks. 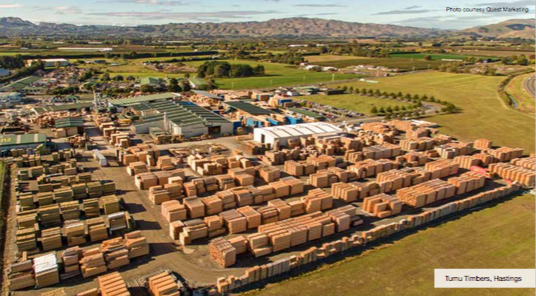 The mix of technology and manual labour pumps out about 5,000 units across two shifts, totalling 22 hours of operation a day.

So how many nails are used in the process? Enough to build around 20,000 houses a year, or in actual nail numbers, 75 million!

Yet for all the numbers, James hopes that the business is not just well regarded for its business success but as an employer of choice.

“The business has increased production significantly for the growing demand for bins and pallets, especially within the horticulture sector, and automation has helped this but not at the expense of losing staff, in fact the opposite has occurred.

“We embarked on a series of automation instalments eight years ago. During that time, a lot of people perceived automation would replace jobs but instead we’ve gone from 50 staff to 150 staff.

“Automation has enabled us to do things better and grow. We have increased volume and are now servicing more customers. We’ve just realigned staff in the process for better utilisation.”

As sectors such as horticulture have grown so has the demand for pallets and bins. But a log of timber is cut for many uses, from building houses through to industrial uses, such as bins and pallets.

As the construction industry is also booming, the demands on timber are stretched. Tumu Timbers sources timber from more than eight sawmills, including sister company Kiwi Lumber.

“Our sheer volume means we need to rely on a range of mills such as Pan Pac, Red Stag, Tenon and Kiwi Lumber. Availability is becoming an issue with a lot of logs being exported. Historically it has been cyclical; previously we would have been able to buy timber for the seasonal demand but now you need to commit all year round.”

As demand increases for timber, the bit in the middle (what Tumu Timbers uses) is under more pressure from the building sector.

This pressure has led to the introduction of new grading technology and computer software to get more out of the raw material.

“We used to manually grade timber with people marking out defects with a crayon based on their visual assessment of a knot.

“Now with computer software and digital grading using cameras and lasers, we can utilise more of the timber and reduce waste while not over spec’ing things.

“A human can probably mark three to four grades on a board of timber while a scanner can instantly identify hundreds of defects and work out which ones can still be used to meet the product specification.”

James says that with technology becoming ever present in the facility, there is more of a focus on upskilling staff.

“We are upskilling staff all the time and looking to recruit, which like many other businesses is sometimes difficult.

“Potential job candidates probably look at us and think we only have people cutting timber using manual docking saws but we’ve got a skilled workforce. We’ve got tradespeople, qualified engineers and timber machinists and we offer apprenticeships and strong career pathways – both within the business and the wider group of businesses.

“One area we have been struggling with is management trainees – ie. future managers – they are hard to find. It’s sometimes hard to convey to someone young about a future career but we have opportunities that can grow into leadership roles.

“The view we’ve got is that TUMU Group is big enough for fantastic career opportunities. You can come in at the factory floor and work your way up; and if you outgrow this business, there’s the other businesses within the group – so if there’s a road block within the business that they are in there’s usually an opportunity elsewhere.”

James says a core business objective is to promote the business as a great place to work.

“That’s about offering a range of things to create a desire to work here. We’ve always been very capable on the safety side having invested a lot of money in safety improvements, but over the past two years, we have focussed on well-being of staff and whanau.”

A well-being committee has been established and the company provides a range of programmes to improve general health including medical checks and mole maps through to encouraging diet and fitness.

“We are currently going through a life- changing challenge. We have 20 staff who are undertaking a programme of fitness activities in our association with the Giants boxing academy in Hastings.

“We also provide free fruit and healthy lunch options and we’ve had some great results not just in staff participants but also their families.”

It looks like Tumu Timbers is fit for purpose and will continue to grow in line with the industries it serves.