From coffee outlets to homes and offices, container buildings are springing up all over Hawke’s Bay. What’s driving this trend and what are the advantages of doing business out of a metal box?

It started in 2011 when Al Borrie opened ‘The Box’ – a modified shipping container transformed into a coffee outlet in Clive.

Another container café – Tamara and Pete Melville’s ‘Magnet’ – popped up on Napier’s Marine Parade in the summer of 2016/17.

Meanwhile, a growing number of Bay residents are choosing to live or work out of the modified steel boxes and container suppliers and building industry professionals say they’re dealing with a growing number of inquiries from potential box-dwellers.

So, what’s the attraction from a business perspective?

Melissa Campbell says when she and Ant were initially looking to set up their Red Bridge venture, they wanted to do something with a bit more flexibility than a traditional coffee cart.

A 20-foot container offered more room, both for the layout of the kitchen and so that customers could stand and sit inside. It also meant an awning could easily be attached, expanding the available cover from the sun and rain.

Melissa says before buying the new container, she did a lot of research and due diligence, including searching Pinterest for container build design and fit-out ideas.

that’s fit for purpose and is also easily relocatable, if they ever decide to move.

She says anyone thinking about undertaking a container build needs to ensure they consider all the costs involved – including aspects such as electrical supply and plumbing – to ensure a realistic budget is put together.

It’s also important to have detailed conversations with your builders to ensure they have the correct vision of what you’re looking to achieve, says Melissa.

Brian says ContainerCo has seen strong growth in the container modification side of its business as interest in container builds continues to grow.

He says a container can be turned into a cost-effective business building but, like Melissa, he advises anyone with a container build idea to prepare a comprehensive budget.

While the initial cost of buying a container may seem cheap, people are often surprised by the high cost of making the required modifications, he says.

If you have the trade skills necessary to do the fit-out work yourself, it can be a very cost-effective building option, Brian says.

“Whereas if you have to get people in to do the work for you, it can get expensive.”

Business people scoping out a possible container project also need to include in their budget costs such as electricity and water. Will you use generator power or mains on your site, and what will be the respective costs of either running the generator or installing an electricity supply? How much water will your business require each day, and where will you source it from?

Every council has different requirements for consenting container builds, Brian says, so it’s important to go to them with architectural drawings and as much information as possible to streamline the consenting process.

“If you have everything ready and you’ve thought about the process they’re more inclined to help you and pass it through.”

Landscape architect Willie Murphy of Pollen Workshop is into his third year working out of a 20-foot high cube container beside his Te Awanga home.

Pollen’s design philosophy is centred around the creation of simple, highly functional spaces and Willie says having an “up-cycled” repurposed shipping container as his office is “a beautiful reflection of this attitude”.

With ranchsliders running most of the length of one long side of the office, there is plenty of natural airflow to keep the office cool through the hot Hawke’s Bay summer.

Temperature control is also helped by the addition of a timber and coloursteel roof and timber slats on the outer walls to stop the metal frame of the container absorbing too much heat.

Brian says considerations around temperature control need to be top of mind with any container build because the interior of a closed, uninsulated container can hit 50 degrees in the hot sun. That said, there are various ways of cooling, insulating and achieving airflow, which need to be factored into the budget as part of the build.

Lighting is another key consideration and again there are a number of options, including installing a false ceiling with LED downlights.

“The more natural light you have the less it feels like you’re sitting in a container,” Brian says.

Melissa says when she and Ant decided to open their second Red Bridge Coffee café at Pakowhai Road, they were able to implement some design improvements as a result of what they had learned from the first container build. 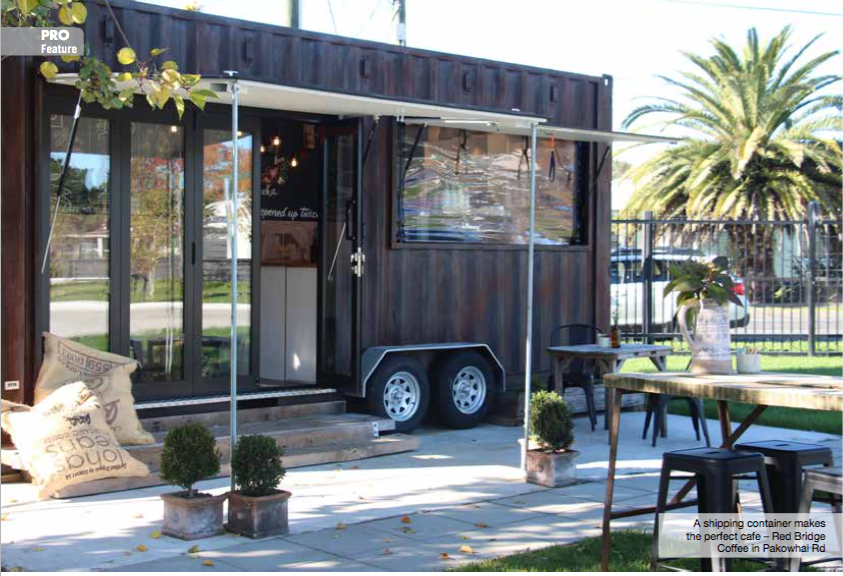 That process was aided by engaging Hastings firm OTTO Engineering, which specialises in designing and manufacturing container builds.

OTTO Engineering managing director Matt Heeringa says making the most of the limited space available is a rewarding challenge when working on a container project.

“Some clients know exactly what they want while others give us very little in the way of a brief, so we have a lot of design freedom, which can be nice.”

As an engineer who has always loved working with steel and also enjoys the challenges of combining it with wood and other materials, Matt says he is excited by the current trend towards container builds, which has captured the public’s imagination.

For business owners, the novelty of a container conversion can even help attract customers, he says.

“It’s something with a different character. People are quite interested in having a look inside a container café because it’s a diversion away from what they were originally manufactured for, so it’s quite cool and interesting.” 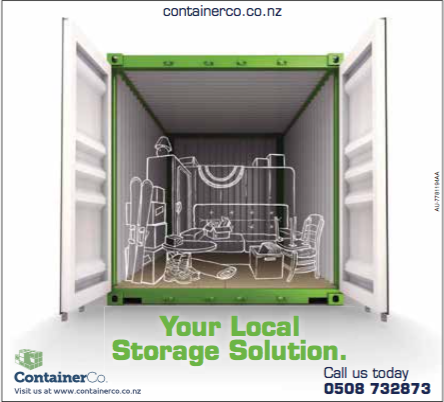