Irongate, south of Hastings, has long been earmarked as a “dry industries” hub and as the regional economy continues to boom, that vision is finally being realised.

Head south out of Hastings along Maraekakaho Road and just outside the city limits you hit a busy industrial patchwork of large and small businesses – some old, some new – sprinkled between large tracts of bare land.

This is Irongate, a ‘dry industries’ zone envisaged by Hastings District Council as a magnet for new businesses as the region’s economy booms.

And while much of the zone remains undeveloped, the council’s vision is beginning to be realised, with several new companies spending millions on new facilities at Irongate over the past few years.

One of the most visually impressive new buildings is the Sunfruit Group packhouse and coolstore, a 12,000 sqm building on the SH 50A-side of the zone. It’s hard to miss it as you drive along the southern section of the expressway.

Sunfruit Group, which has growing and packing interest in Hawke’s Bay and the Waikato, built the new packhouse to enable the company’s expansion as pipfruit exports go through a period of strong growth.

The company told media last year the new facility would generate 50 new jobs and more could be added with future expansions.

It moved into the new property in time to begin processing this year’s crop.

Other fruit growers have their eyes on Irongate, including the Rockit Apple brand. In April the company was granted resource consent by the district council to build a substantial coolstore and packhouse facility on an 8.5-hectare property on Irongate Road East.

According to the company’s consent application, the development will include a 25,100 sqm industrial building and the site will also be Rockit Apple’s national and global headquarters.

The office facilities will be designed to house up to 50 staff, a number the company expects to be employing by 2023.

The packing and processing side of the business will employ up to 340 seasonal staff working over two shifts at peak times.

With hundreds of staff now employed at well over a dozen businesses in Irongate – and hundreds more set to flock to the area under planned new developments such as Apollo’s – the zone is clearly demonstrating its potential as a driver of economic growth for the Hastings district and the wider Hawke’s Bay region.

Hastings District Council Group Manager economic development and organisation improvement Craig Cameron says the overall vision for the 118-hectare Irongate Industrial Zone is to provide a suitable zone for ‘dry’ industries requiring a large land area and from small to large building areas. The required average lot size is one hectare, with a minimum of 5,000 sqm.

“The driver is to respond to increasing demand from industry, particularly those supporting our booming horticulture industry. Encouraging industrial development aids in council’s stated aim of growing sustainable jobs in the region.”

But the development has been slow and controversial, with landowners fighting a 15-year battle with the council over the level of development contributions that are appropriate to get water, wastewater and roading services built in the zone.

“I would say that Hastings missed out on at least 12 years of economic development potential due to the inaction and a lack of understandingofthebusinessopportunities it was losing,” says Irongate landowner John Roil.

“Council will say this was due to the economic downturn and the global financial crisis but if you ask any person that was involved with Council from the immediate area, they will advise you that the main reason was due to the development contribution policy,” and a lack of engagement with the stakeholders,” says John, himself a former Hastings district councillor.

“As an example of the development contributions as they were in 2015, to construct a 5,000 sqm shed would have set you back $540,000 per one-hectare site and you would be required to install sacrificial services if you wanted to develop before the council provided these services.”

“It took an Environmental Court case plus meetings with the affected landowners to provide the catalyst for council to change their view and as a consequence, a variation to the District Plan was signed off in February this year,” John says. 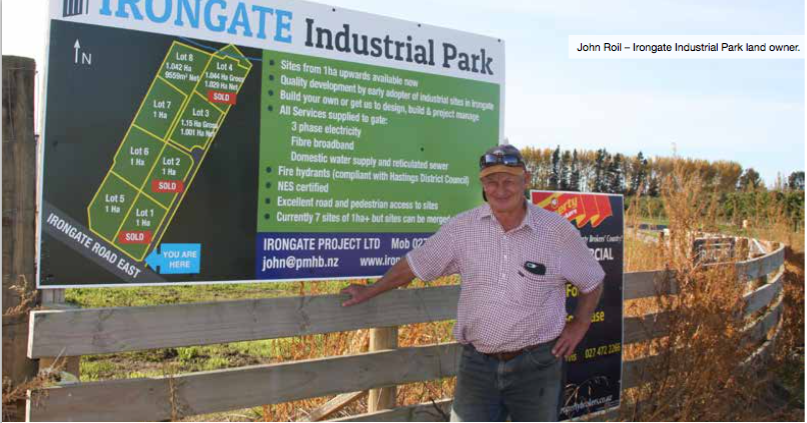 Asked about the significance of reducing the DCs, Craig says the council was only able to recover costs with regard to development contributions.

“A number of elements have come together at Irongate to enable council to lower the DCs from the initial estimates. Those include developers paying early in the life of the project thereby lowering interest costs; the increased size of the zone, which spreads the cost over a wider area; the removal of storm water from the infrastructure after input from landowners; and bringing the infrastructure installation in under budget,” he says.

“The importance of bringing the DCs down is to fulfil council’s obligation to only cover costs and, of course, it makes development cheaper, thereby encouraging projects to go ahead,” he says.

Council has also appointed a key account manager to Irongate in Jennifer Bainbridge with the goal to streamline the council service delivery.

Improvements to the zone’s roading infrastructure include the rebuilding of Irongate Road West and the installation of a roundabout at the Maraekakaho Road and Irongate Road intersection. Those projects are expected to be completed during the 2018/19 financial year.

In May last year veteran plastic manufacturers Polymer Systems International Ltd stepped in to buy the assets and save the job losses of 20 or more Waipak staff.

General manager Dan Crawshaw says since then, they have made significant investments in overdue plant maintenance, and new plant and quality testing equipment at Waipak’s Maraekakaho Road premises, and “the team and the business are humming”.

Waipak has the capability to manufacture a wide range of injection and blow-moulded products such as bottles, food packaging, caps and closures.

Dan admits plastic bottles and closures were not part of Polymer’s business plan until they learned of the opportunity to purchase the Waipak assets.

“It was probably our passion to keep business in the Bay and provide jobs and fresh employment opportunities along with a fresh challenge that spurred us into action,” he says.

“We’ve expanded our production capacity massively since taking over to meet demand and position ourselves better for future growth.”

Dan says there are many advantages in doing business from Hawke’s Bay including easy access to Napier Port, competitive backload rates with carriers, and a strong base of automation and technical processing skills.

“Costs are generally lower than they are in major centres. Polymer Systems has thrived in this central location, and we’re pleased to report that Waipak NZ Ltd is headed in the same direction.”

It’s a sentiment that others will be hoping to echo as the Irongate industrial community continues to grow. 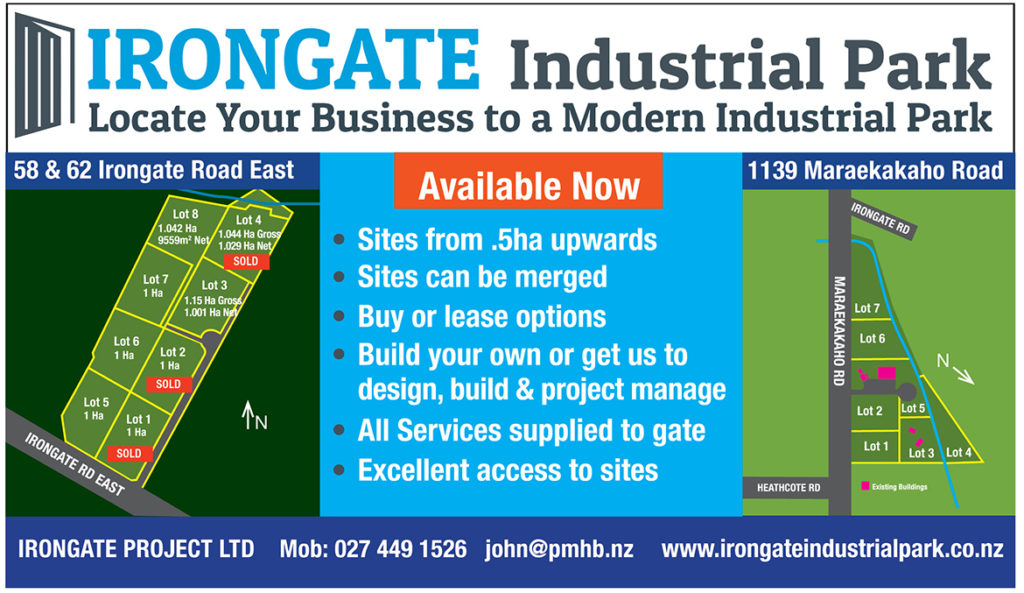