Economic Development in Hawke’s Bay is set for a big shake-up. However, Minister for Regional Development and local MP Hon. Stuart Nash is urging the region’s councils to have a new delivery model for economic development up and running faster than the proposed timeline of 12–18 months. He is also telling the councils they’ll need to contribute more money for it to be effective.

In February, all five councils across the region – Hawke’s Bay Regional Council, Napier City Council, Wairoa District Council, Hastings District Council and Central Hawke’s Bay District Council – agreed to complete a review by Giblin Group, at a cost of $40,000, which will further develop the preferred option of a Council Controlled Organisation (CCO). The proposed shake up and likely move to a CCO has brought to an end to Business Hawke’s Bay (BHB), an independent business-led economic delivery agency (EDA) but funded by councils. Following the decision by council’s to complete the review, BHB chair Stuart McLauchlan made the tough call to bring the organisation to an end after 11 years.

“The board has wrestled with this decision, as BHB has made a genuine and significant contribution to Hawke’s Bay over the past decade, delivering much needed services to the region’s business community and the wider economic development eco-system. “We are disappointed that we won’t be playing a part in the future economic development of our region and we’re sorry for the impact this decision will have on our people, who have given their all, and put up with considerable uncertainty for a long time.”

He says the board will now work collaboratively with Councils to try and preserve as much value and IP from BHB’s activities as possible; including its people and securing the future of the two Business Hubs, as well as BHB programmes serving start-ups, the food and fibre and hi-tech sectors, along with regional talent attraction and retention.  The date of the wind up will be determined as part of the transition arrangements to be negotiated with the Councils. BHB, which has also operated the shared Business Hub in Ahuriri since 2015, has received a total of $320,000 a year from the councils – just 3 percent of a total $10 million investment by councils. Hawke’s Bay Tourism receives 15.7 percent of the total funding. 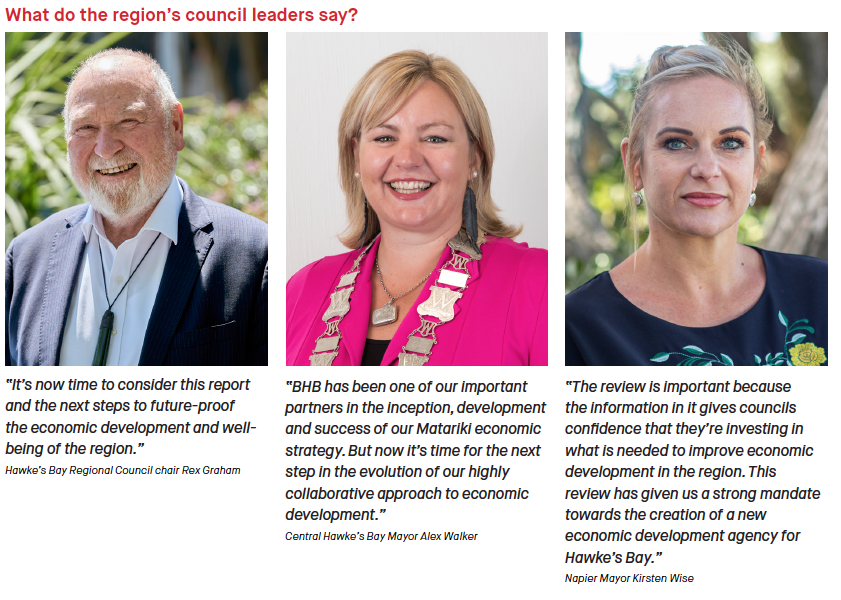 The review recommended the disestablishment of BHB and the establishment of a CCO instead. The report also stated at least a further $1.6 million in funding was needed for it to be effective. It also recommended that the Business Hubs in Ahuriri and Hastings continue to be funded. Councils will now independently receive the final report before deciding how they will each participate and contribute to the delivery of economic development. 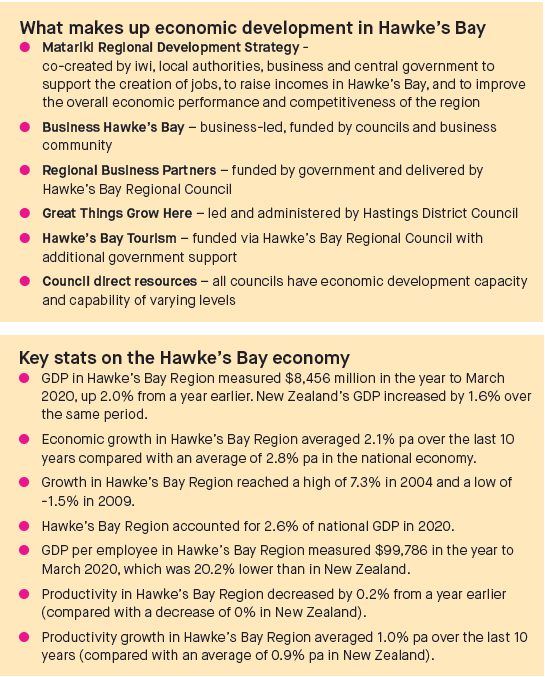 However, it’s likely that Hastings and Napier will be asked to stump up the most cash, with Wairoa and Central Hawke’s Bay ratepayers already expecting a significant rate increase.

In an exclusive interview with The Profit, Stuart Nash, who also holds the portfolios for small business and tourism, has put the acid on councils to have a new organisation structure, including the appointment of a new chief executive, within six months. 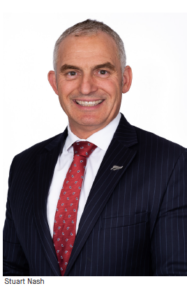 “Twelve to eighteen months is far too long. I can’t see why a new chief executive can’t be recruited within three months and a new organisational structure up and running within six. What this would require, of course, is for the councils to quickly agree on a new way forward and divert some of their current local economic development budget into a region-wide organisation.

“This is certainly what I would like to see as Minister. The region runs the risk of missing out (again) if we don’t have a highly functional EDA operating for 12 to 18 months.”   Stuart also believes the council’s current approach of operating their own economic development resources isn’t helpful and that a better coordinated approach is the best way forward.

“My understanding is that there is around four to five million dollars spent directly across the region by the various councils on economic development.

“As Minister of Regional Economic Development, I would like to see a more coordinated approach taken by councils across our region to economic development. So, it’s not so much a matter of money, but rather a strategic agreement – and then operational implementation – on the way forward that is of highest importance.   “The fact that around five million dollars is spent by the various councils on their own economic development strategies, and yet there is no regional EDA, is incredibly frustrating and counterproductive to regional economic growth.

“Let’s face it, if one of the Bay’s towns and/or cities does well, the whole region benefits.” Stuart also hopes that the councils consider the inclusion of the strongly performing entity Hawke’s Bay Tourism as part of the new economic development model. “Hawke’s Bay Tourism does a fantastic job and really stepped-up post-Covid to maximise the region’s tourism potential.   “There are around 15 EDA that also have the regional tourism organisation (RTO) incorporated within their operational structure.

“As minister for both Tourism and Economic Development, I have asked my officials to provide me with an analysis on the most optimal structure given the ability to compare the different models across the country.

“I am certainly not against the concept; in fact, I may well recommend this structure to the councils going forward.”

Stuart adds that Hawke’s Bay Tourism also has a high level of transparency and accountability back to the Hawke’s Bay Regional Council, whereas none of the councils have representation on the board of BHB and yet BHB demanded ratepayer money for operational funding.   “With regards to BHB, there was perhaps a disconnect between private sector and public sector understanding of the important role of key stakeholder accountability.”

Meanwhile, as this council consultation works its way through political decision-making and community consultation, Business Hawke’s Bay is likely to cease operating – either prior to or after the current funding ends in June – as well as leave much in limbo. Something that Minister Nash will keep a very close watch on.