He may be closing in on 90 years of age, yet Hawke’s Bay’s greatest living inventor continues to submit product patents.

A.R. (Ray) Turner just can’t stop inventing. He’s so prolific that in the past three years, he’s listed 36 patents with the Australian Patent Office. During his lifetime he’s patented more than 100 inventions.

His first invention was in 1954, which was an automatic photographic radar speed detector.

All his life he’s been coming up with ideas and problems solving.

“If someone puts a problem before me, I will solve it because my mind works that way. I’m always thinking of ways of doing things.

Ray rose to prominence for inventing products for the building industry, such as the spring door stop, the angle brace and nail plates.

Pryda, the company which had its beginnings from his home in Taradale in 1964 and which he sold in 1986, is now part of a large international conglomerate, which still proudly has a manufacturing plant in Napier.

Ray will be guest of honour as the company celebrates 50 years this year.

Ray has been out of the spotlight for many years but his daughter Debra Malone read the feature on local inventors in the last issue of The Profit, which motivated her to contacted us to say we had left out “the greatest inventor of all time, who lives in Napier.”

The email went on … “he invented products that revolutionised the building industry around the world, ending up with over 100 patents to his name.

“He employed many people here in the Bay and would specifically employ the deaf to run the huge steel plate presses in Onekawa.

“He is a fascinating man, who is very humble about his achievements.”

Following this email Debra arranged for me to meet with Ray.

When I arrived, I was warmly welcomed at the door by Ray and his partner Elva. He guided me out to the back of his home where he quickly produced folders of his achievements, product patents, media clippings and a bound book he was presented by his seven siblings on his 60th birthday.

At 89, Ray remains pretty mobile and agile of mind. He professed to not having the memory of yesteryear but still fondly retold many stories, along with sharing his ideas on solving some environmental issues, such as converting sea water into drinkable water and

constructing houses on water, to overcome the risk of earthquakes and relieving pressure on land use.

So why is Ray still inventing? He’s still hoping to strike it big with another invention but he says that in his late 80s he was getting bored and needed to keep his mind active.

“I look up websites for manufacturing companies all over the world and look at what they are making and if I can do it better.

“That’s why I started Decklock [his latest project] three years ago because I was bored and I had nothing to think about. I started inventing again but there’s not the demand here [for decklock], I’ve started it in the wrong country.”

He still has high hopes for Decklock, for which he’s developed marketing collateral such as brochures, videos and a website, www.decklock.co.nz, but he’s struggled to convince hardware stores and builders to use the product.

“I did get it right the first time [Pryda], it went off like a rocket.”

Ray says his greatest achievement is the growth and success of Pryda, which he sold in 1986 for a “few million”, which enabled him to help buy homes for his children.

He exclaims that the business was recently bought out again for $87 million!

Pryda’s first factory (under the name A.R. Turner) was set up in the games room of his house in Church Road making spring door stops.

As the demand for door stops increased and new products were invented, the business needed a larger factory and Ray moved to a block of shops he’d built in Gloucester Street, Taradale. 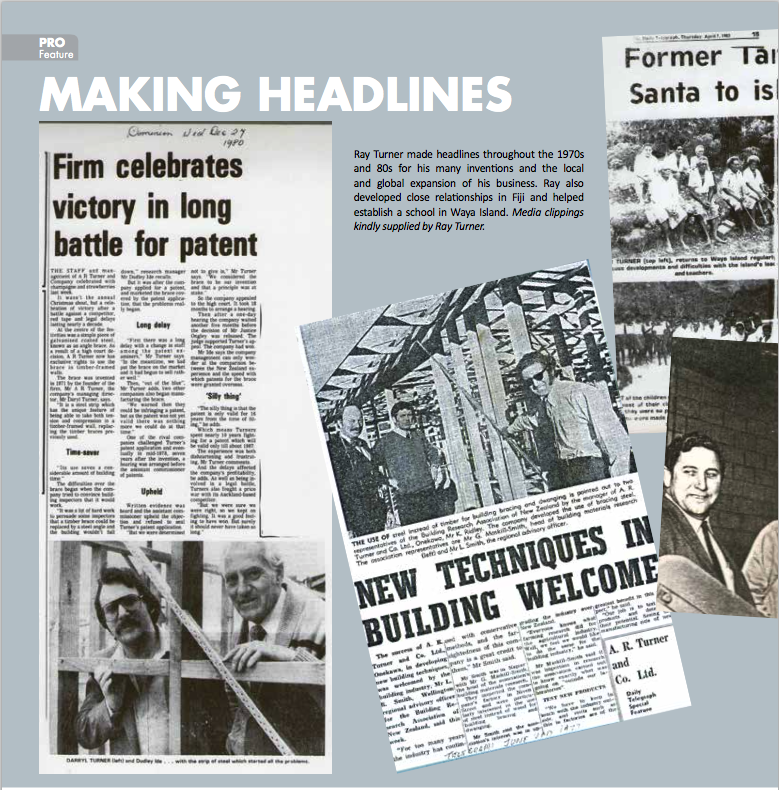 Around the same time Ray, changed the company name to Pryde to avoid confusion with another hardware company, Stanley Turner Hardware.

He took advice from Oliver McKnight from a Hastings advertising agency to name the company Pryde, but a few years later the name was slightly changed to Pryda, which in Norwegian means adorn.

“I kept getting introduced as Mr Pryde and we then also found out that we couldn’t register the name as it was a surname, so we changed it to Pryda.”

At the same time he went into partnership with toolmaker Bob Witham, who had the ability to turn many of the inventions into commercial reality.

The company also established a testing laboratory, where Ray invented the angle brace, which has been an international success for more than 40 years.

As the business continued to grow, Pryda needed more space and the business moved to 75 Niven Street, where the New Zealand operations are still located today.

Ray bought six new truss presses and the company’s famous Claw Nail nailplate product was one of the first products to be manufactured from the factory.

The product was so successful that Ray couldn’t source enough galvanised steel in New Zealand, and had to start importing it from Australia.

In the late 1960s, Ray undertook some joint overseas ventures in South Africa and Fiji. The South Africa venture stopped because of the political situation but Ray formed close relationships with hardware outlets in Fiji and also helped develop a school on Waya Island, which was named afterhim.

“We sold many of our products to the Pacific Islands and in particular Fiji, where we became benefactors to an island group called the Yasawa Island and Waya Island.

“We provided money for the classrooms as well as furniture and we also supplied power generators and other materials.”

Products such as the claw nail plate, truss presses, jogs and the angle brace were patented and were in demand in New Zealand and other countries including Australia and the US.

In 1970 Ray sent his eldest son Daryl to Australia to set up Pryda in Dandenong. By 1972, Prdya had its first truss plant in Adelaide and by 1975 Daryl, had developed truss design technology using a four kilobyte memory Wang 2200 computer.

Ray admits that in the mid to late 1970s he was a workaholic. The business had grown substantially and was a seven-day operation, and he was working up to 16 hours a day.

THE FUTURE IS 3-D PRINTING

Over the years Ray says he’s spent thousands of dollars on patenting and product development, including regularly visiting Napier firm Axia Design Group to develop 3D modelling of his inventions.

Ray’s fascinated by 3-D printing. He says it’s the most exciting technology development and he quickly produces some information pulled off the Internet about a house being built by a 3-D printer.

“I would be a little kid with a toy if I got one, but I think I am past it at 90 years. It would be just too difficult for me to master.

“They’re wonderful. In the last week or two I’ve been looking up everything with 3D. It has a tremendous future for the building industry and for the world.

The opportunities are endless as you can even make human body parts and grow flesh around them.”

Ray has no plans to stop inventing, although money is now more of an issue than back in the 1970s and 80s.

His wife Elva admits it’s not uncommon for Ray to get up at 3am and go to his computer and start researching or mappingoutanotherinvention.

Ray looks sheepishly as he shows off his latest inventions and talks about what else he’d like to invent.

“It’s [inventing] made me poorer. I used to have a lot of money and owned houses, a motel and 12 companies, but I have no regrets … apart from wishing I still had 10 percent of Pryda!” 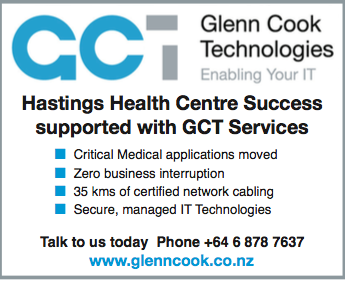