At Red Steel, it’s all about creating efficiencies to ensure deadlines and budgets are met.

Since 2002 Red Steel managing director Bob Hawley and his team have honed their processes and focussed on increasing production from their Pandora workshop. 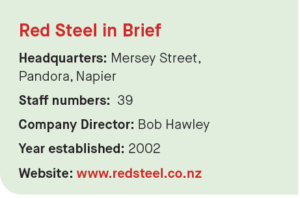 Red Steel has developed streamlined processes within its supply chain, introduced smart software to track all projects, and invested in equipment that enables a turnkey project solution.

Red Steel started work on the project in August 2019 in the very early stages of the construction of the 20,600m2 post-harvest facility for Rockit Global.

The state of the art facility in Irongate was predominantly built of steel. In fact the building is made up of 33, 346 pieces of steel, which span a total of 57 kilometre and weighing 1012 tonne!

Red Steel managing director Bob Hawley says it’s been one of their major projects over the last year with the majority of the 39 strong workforce of detailers, fabricators and site crew involved in the project.

The steel was transported to the site and put together using 23,425 bolts. Working to a tight construction programme we staged our on-site activities to allow follow-on trades to commence work as we progressed down the building.

Bob says the Rockit project is the second largest food processing facility they’ve been involved with and he’s particularly proud that it was all done in house.

“We started on the project very early with our detailers working alongside the engineer consultants Strata Group, who did the design and by being involved early enabled us to tweak details, which made it more cost effective.”

“A job like this is about repetition. We love repetition as we get efficiencies going  that benefits all involved.

Detailing has been at the forefront of Red Steels quality procedures since it was brought in-house 15 years ago.

The business has gone to the next step introducing machinery on the shop floor that “talk” to the detailing software – parts are now cut, marked and drilled by machines that receive their instructions directly from software programmes removing the need to print drawings and risk human error when manually completing these tasks.

The latest machine is a PeddiWriter which adds layout marks on steel sections removing the need for fabricators to manually measure and mark out where items are to be welded together.

Only one other fabricator in New Zealand has a Peddiwriter, and they’re in the South Island.

Red Steel has some major projects on the go both in Hawke’s Bay and in Wellington.

Hawke’s Bay projects include the new large format retail centre in Taradale Road – The Crossing and a new multi-story apartment living and retail building in Ahuriri on the site of the former iconic NJ Price Building. Red Steel has also started on the HB Regional Aquatic Centre at Mire 10 Sports Park.

“There’s a lot of work in the pipeline and it’s exciting to be part of building landmark structures in the Bay.”