Ten adrenaline seekers from Hawke’s Bay – bar one from Hunterville – started 2018 on the ultimate product promotion trip that they’ll never forget and which is now set to become a regular opportunity for others.

While Hawke’s Bay was in the midst of a hot summer, the 10 blokes and one of the wives were ploughing their way through the Canadian wilderness on high-powered snowmobiles reaching speeds near 200 km/hr.

Bay Motorcycles general manager Jono Kight organised the adventure as a showcase of Bombardier Recreational Powersports. (BRP) Ski-Doo (snowmobile), taking clients that already own a BRP vehicle and either use it in the day-to-day running of their business (such as farmers using side by side Can-Ams) or for recreational use, such as a Sea-Doo – the best jet ski on the planet.

Jono says none of them had any idea of what they were about to experience and a few months on since the trip, they’re all still hooting and high-fiving about the eight-day high-speed trek across frozen lakes, four- metre-deep snow and encounters with wild moose and deer.

The snowmobile tour of the wilderness surrounding Montreal and Quebec came about following Jono attending a BRP conference in Texas earlier in the year. BRP is the world’s leading powersports company and has a specialist adventure tour company – VIP Adventures (www.vip-adventures.com).

“VIP Adventures was promoting these high- octane-fuelled adventures in the snow of Canada and the deserts of Brazil on BRP powersport vehicles. It got me excited and I thought it would be a great way to take some clients who, like me, love going fast and having an adventure!

“I put the feelers out to a few people and pulled together a group that was ready and raring to go. They all now say it was one of their best trips ever, while it was a great marketing tool for us in showcasing BRP. It’s something that none of us would have ever done and was an experience of a lifetime.”

The trip is highly subsidiszed by BRP; this was a chance of a lifetime and as it was all organised, there was little they had to do except pack some thermals and jump on a plane with Jono.

The trip started with a visit to the home of BRP in Valcourt where they visited the interactive Bombardier Museum of Ingenuity, where BRP was started by Joseph Armand Bombardier, before having dinner at the just as famous Maple Sugar Shack – a Canadian must.

In preparation for riding the Ski-Doos, they went to the Valcourt Ski-Doo Grand Prix – the world’s largest grand prix of racing snowmobiles, snowcross motocross bike and vehicles held on an ice oval, snowcross and drag racing.

“It was the most un-PC racing event I think we’ve ever seen, a huge amount of fun and laughs and it certainly got our eye in for the next eight days,”

The following day the tour started in earnest at a place called St Raymond, when they were given 600-850cc snowmobiles that can reach speeds in excess of 200 km/hr.

“All the gear and skis we were given were second to none. There was no training as such, it was ‘here’s the throttle, the brakes don’t really work on snow, so let’s go and have some fun’.

“They were really easy to ride – pretty much like the jet ski versions that we are more used to in New Zealand.” 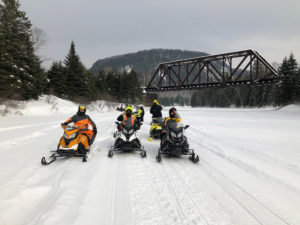 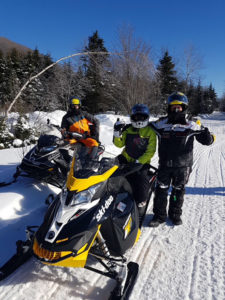 A big difference was the temperature, which was as low as -22 degrees!

“On the first day we rode about 150 kilometres through farmland and forests, with scenery you can’t explain to anyone else. After the first few hours we all thought we were expert riders and so the racing began.

“We started to run behind schedule and that’s when the real fun started! We were riding through forest tracks; it was snowing, visibility was poor, it was pitch black and with only our lights on, it was like driving dodgems. Luckily we all got to our accommodation in one piece and we all agreed this was going to be the best-ever adventure!”

There were plenty of thrills and spills as they all navigated their way through snow- laden forests, climbing mountainous tracks and riding over frozen lakes.

“We would ride about four to five hours a day from either some cabins or a hotel. The terrain was a real mix and the scenery was jaw-dropping.

“We all felt a ‘need for speed’ and got the opportunity to go full throttle across Lake Édouard, where one of us reached speeds of close to 190 km/hr.”

The hospitality was as memorable as the riding. They stayed at a little pub in Lake Édouard for two nights. It was a very remote area with a population of about 150.

“This is in the middle of nowhere, so when people come to stay from out of town it seems a perfect time for the entire population to come together and party with us. They were fantastic hosts and although the majority only spoke French, we made it through with a lot of laughter and very fond memories.”

Although the trip is quickly becoming a distant memory, travelling together over 800 kilometres on Ski-Doos (the distance from Wellington to Russell) has created some long-standing relationships and was “one of the best marketing initiatives we’ve ever done,” says Jono.

“I’m already planning the next trip and the beauty of BRP products is that they cover summer and winter adventures. We can go Can-Am driving in deserts of Brazil to jet skiing in the Mediterranean.”

Bay Motorcycles is now a tour partner with VIP Adventures and Jono is exploring opportunities for tours in New Zealand for international BRP customers, as well as taking New Zealanders to the likes of Croatia, Brazil and North America.

“I’ve quickly found that there is a demand for these sorts of trips. This trip has got people talking and now I’m doing a bit of reconnaissance for all sorts of adventure options. I’m not sure what else is around the corner but it’s all very exciting.”

So, watch this space for the next trip or email Jono at jono@baymotorcycles.co.nz.

“It’s more affordable to do adventure travel as an organised group rather than on your own, and it also gives Bay Motorcycles an opportunity to do something very special with our clients.” 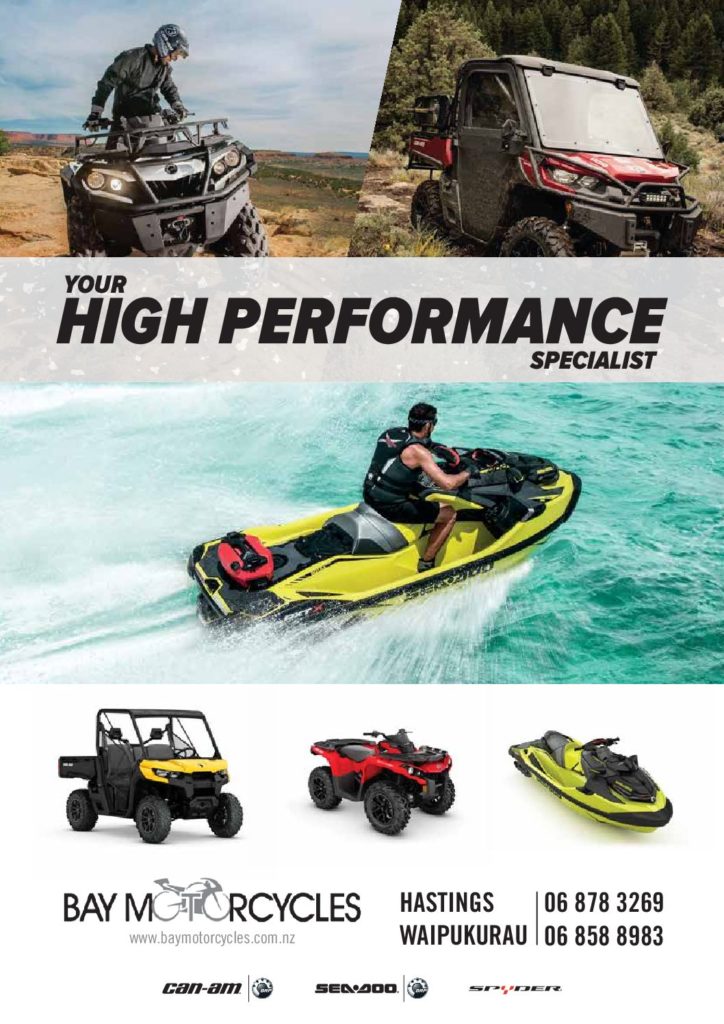