The 2018 Napier Port Hawke’s Bay Primary Sector Awards has this year recognised the outstanding contribution of seven past, present and future leaders in their field.

Hosted by the Hawke’s Bay A & P Society at the Hawke’s Bay Showgrounds, Tomoana, Hawke’s Bay’s Primary Sector Awards is the biggest night on the region’s primary sector calendar with over 400 people gathering to mark the event.

The society’s president Simon Collin says championing and celebrating primary sector excellence has reached a new level for the region.

“These awards celebrate our past, present and future leaders. They are working incredibly hard, they are all dedicated to their different sectors and they are all making a real difference in helping make our region successful.

“Hawke’s Bay’s has a proud history as a primary sector engine house from its rugged hinterland to the rich productive plains of the lowlands. We have seen innovative producers harness these resources to place the region as one of the most significant food producing regions of New Zealand.” 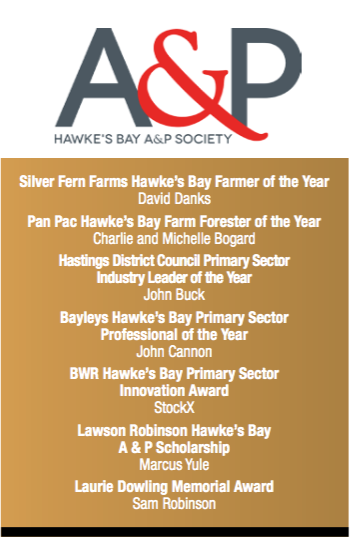 Announcing the award winners, chairman of the Award’s committee Peter Tod says it’s pleasing to see such a high calibre and depth of entries across all competitions within these awards.

“It shows the strength of the primary sector in Hawke’s Bay, and future leadership and innovation will continue to drive our economy.”

“David demonstrated real strengths in his business across governance, management and supervision of this property. There is a formidable team who are all accepting of innovation and performance gains in a sustainable manner to achieve award- winning results”.

Maraekakaho farm business owners Charlie and Michelle Bogard won the Pan Pac Hawke’s Bay Farm Forester of the Year Award. The Bogards’ had excellent forestry management, and showed how small farm units can be maintained within a family. While the pastoral management is leased out, they keep a close eye on what is happening and remained fully involved in the decision-making.

This year Hawke’s Bay raises a glass to John Buck, as the recipient of the Hastings District Council Primary Sector Industry Leader Award for 2018.

In doing so, Peter says the sector recognised him as a pioneer, innovator, and entrepreneur.

“We thank him for the significant contribution he has made to both the wine industry and Hawke’s Bay. With so many accolades and awards over the years, John is a very worthy recipient”.

As chairman of family owned Te Mata Estate Winery, he considers his greatest accomplishment as taking a run-down, historic, business to a position that its classically styled wines are today regarded amongst the world’s best, all while remaining privately and New Zealand owned.

John is the first resident Hawke’s Bay patron of Cranford Hospice and chairman of the Cranford Foundation Trust, which is building a new hospice at Chesterhope between Hastings and Napier.

Bayleys Hawke’s Bay Primary Sector Professional of the Year winner, farm consultant John Cannon, is recognised for being a highly regarded professional among his peers and fellow industry experts both locally and nationally.

“John makes an outstanding contribution through his knowledge, skill and application to improving the performance of businesses in Hawke’s Bay and beyond,” says Pete.

The inaugural BWR Hawke’s Bay Primary Sector Innovation Award winner went to StockX, which is leading innovation, through an online platform that trades livestock across New Zealand. StockX is the only business of its type currently operating in the country.

Coming together 29 months ago, StockX has grown in excess of 3,700 registered farmers and 16 meat processing companies, with a collaborative approach to market functionality and design, being a key focus for growth

The considerable time Sam has spent mentoring young people in the agri-business sector and within farming over the last three decades, is a real tribute to helping grow future leaders, says Pete. 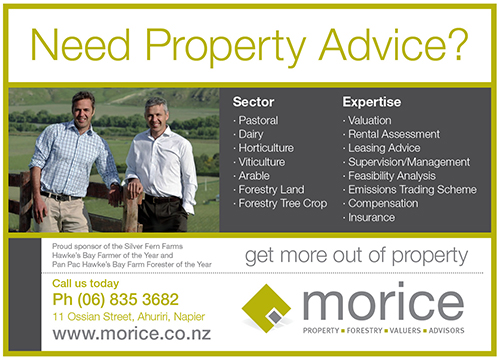 Anna Lorck has a background in journalism, editing and publishing. Along with her husband Damon Harvey, they started ATTN! marketing pr in 2003. A contributing writer to the PROFIT, Anna also oversees business development and works closely with PROFIT clients, contributors and advertisers. Anna is a true champion for her region, Hawke's Bay. She is highly experienced in strategic communications and has experience in running highly successful public campaigns. Anna is an elected member of the Hawke's Bay District Health Board, she served 7 years on the Hawke's Bay Chamber of Commerce, and she sits on the Hawke's Bay Primary Sector Awards advisory group.