Strata Group is well placed to be at the forefront of the ongoing economic growth of Hawke’s Bay, which is seeing massive investment in commercial, industrial, residential and infrastructure builds.

With a healthy current and future pipeline of work, Strata Group director Duncan Bruce says there’s been a stronger focus on retaining talent and providing career pathways through to shareholding in recent years.

The business was established by Duncan, Russell Nettlingham and Guy Lethbridge in 2008 and since then has accumulated an impressive portfolio of construction projects both in Hawke’s Bay and beyond. 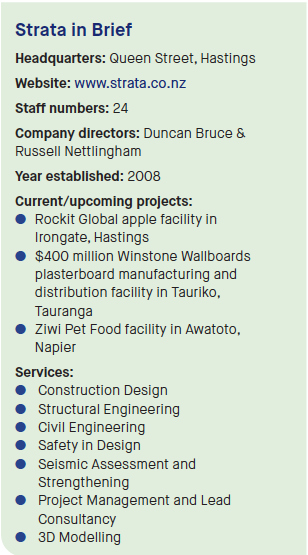 Having previously completed the engineering design of the Porters Hotel and Village Exchange and more recently the Joll Road commercial development in Havelock North, leading the Sunfruit Orchards Distribution Centre development, Strata Group are currently involved in the construction monitoring for the strengthening of the Hawke’s Bay Opera House as well as civil engineering for multiple residential developments in Hastings, Napier, Havelock North and Central Hawkes Bay.

“We’ve had a business mentor involved in the business strategy, helping us set the future strategic direction and as part of this, we wanted to provide a pathway for key members of the team that included having some ownership in the business.

“This would help us retain talent, and gives both Russell and I the opportunity to step away from the day-to-day hands-on role of working on projects to instead focusing on client relationships and developing new opportunities and innovation.”

“Lastly, it also creates a legacy business; a business that started in Hastings over 12 years ago and can stand the test of time and continue to be involved in the development of commercial and industrial buildings, residential developments and infrastructure projects across the Bay and beyond.”

In May this year, Strata was part of the local contracting team that handed over the 20,600 m2 (2.06 hectares) multimillion-dollar Rockit Global facility in the Irongate industrial zone. It was Strata’s second large-scale packing facility project in the area.

Rockit Global chief executive Mark O’Donnell says the company was pleased to partner with a number of companies that have been committed to delivering the project. While I can give credit to all those we’ve been working alongside, Strata and MCL are two local businesses that have performed extremely well.

It’s well reported that there’s a construction boom both in Hawke’s Bay and across New Zealand and Strata is looking to make the most of that boom.

Russell is leading one of the largest industrial building complex projects currently in New Zealand with the $400 million Winstone Wallboards new state-of-the-art plasterboard manufacturing and distribution facility in Tauriko, Tauranga, which will open in 2023.

Other current projects include the $70 million pet food factory for Ziwi in Awatoto, which is a major economic boost to Napier, employing 125 workers in the 12,000 m2 facility. 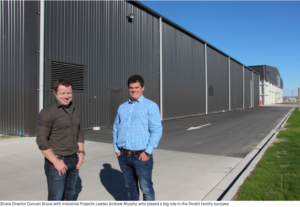 Duncan says the business is also excited to be involved in Foodeast, a foodhub in Elwood Road, Hastings, that will provide significant opportunities for up-and-coming food processing businesses.

“This is a fantastic opportunity to further position Hawke’s Bay as the food bowl of New Zealand, creating new innovations and food products that will showcase the food growing attributes of the Bay.”

The Rockit Global packhouse and storage facility has set a new performance benchmark for the horticulture sector, says Duncan.

Strata was first engaged in 2016 to look at the design requirements of a modern packing facility.

The first step was to identify where would be the best place for the large facility.

Hastings District Council had created the industrial zone in Irongate, and Strata had already been involved in the development of the first post-harvest facility in Irongate for Sunfruit.

Duncan says the layout of a packhouse was driven by maximizing the use of the site given the site boundaries and fire regulations which on site incorporates a full sprinkler system that protects the entire site.

The complex build and a condensed build time due to COVID-19 added pressure but with a close working relationship with the Hastings District Council consenting team, building consents were able to be staged and more openly and efficiently managed.

“Overall this facility has raised the bar and importantly, we had a good working relationship with the council who appreciated us giving them an early heads-up for when to expect Consent documentation.

“MCL did a great job as construction lead and one key decision to pre-order building materials before COVID-19 ensured that downtime was kept to a minimum.

“Special mention must go to key Strata Group team member Andrew Murphy our Industrial Projects Leader who was involved from the start and who has been a big part of this projects success.

“Every business involved worked hard and gave it their all. It was fantastic to work with the likes of Worleys, MCL, Redsteel, Active, Almak and everyone else involved.”