Hot off the completion of a $21 million indoor sport facility in Rolleston, Apollo Projects are simultaneously building two of Hawke’s Bay’s most prominent sport facilities.

Apollo’s Hawke’s Bay Regional manager Steve Bailey said the team is in the early stages of the multi-million dollar Olympic-sized indoor swimming complex at Mitre 10 Park in Hastings and is about to start preparation of the construction site for the indoor court extension at Pettigrew Green Arena in Taradale.

The Apollo Projects team will be based at the Sports Park in Hastings and will service projects across Hawke’s Bay, Poverty Bay, Taupo, Manawatu and Wairarapa.

The business isn’t new to the Bay, completed projects include a cool and dry store complex for Bidvest and a processing facility for ENZA Foods.

Steve has made a permanent move from Christchurch, a move that he’s incredibly excited about.

“I’m hoping this is my last move. Hawke’s Bay feels like an awesome place, the climate is better than I’ve been used and the people I’ve met so far have incredibly helpful and friendly. We’ve got a couple of fantastic projects to start on and there’s plenty of opportunities that match our expertise across the food and beverage sector as well as sport and aquatics facility development.”

Steve and his family moved from the United Kingdom to New Zealand in 2013. He started his working career serving in the Royal Marines before getting involved in construction, initially as a roofing contractor, before moving into construction site management and has since achieved qualifications in architecture and project management.

Steve and his family were looking for a lifestyle change and New Zealand appealed as a great opportunity.

What the family didn’t know was that Steve was about to put them into an environment that was similar to a warzone, following the devastating Christchurch earthquake in 2011.

“Initially I took on a role working on the earthquake building recovery programme. It was shocking and sad to see the devastation that the earthquakes had caused, but I feel proud that I could play a small part in the rebuild of Christchurch.”

Steve says Apollo Projects has developed a reputation as a problem-solving business, starting with an involvement at the design stage with a focus on optimising and getting the best out of the building, whether it be an indoor multi-sport facility or dairy plant, winery or cold storage facility. “By engaging early with our clients, we can provide guidance at the right time to achieve the desired outcome within budget.”

When directors and CEOs Craig Waghorn and Paul Lloyd started Apollo Projects in 2001, they were determined to break away from the traditional management process and do things differently.

They saw an opportunity to partner with clients from the very start, taking their ideas right from concept all the way through to completion – something that had been poorly executed in the industry. 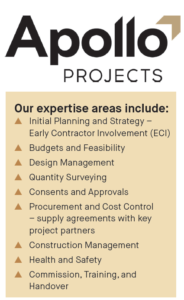 At Apollo, they’ve never been afraid to challenge the status quo.

Apollo Projects has an enviable track record and has been involved in some of New Zealand’s most significant build projects.

Today, Apollo is a leading New Zealand design and construction company with professional project delivery and support staff across the country,  having worked on projects for clients including Fonterra, Goodman Fielder, George Weston Foods, Ngai Tahu, and Lion Co as well as private owner-operated businesses, sports organisations, and Government/Council entities.

“Even though Apollo has grown over twenty years, we’ve never lost our core value that a ‘client’s trust is everything’.

“Apollo is different simply because we operate as a partner with our clients – our goal from the very beginning has always been to build strong relationships from which we can deliver successful projects.”

Hawke’s Bay is a major food producing region, possibly the best in New Zealand, due to the variety of fruit, vegetables and protein foods produced.

It’s also a physically active region, with many sport facilities and investment in new developments and upgrades such as the swimming pool complex, being led by the Hawke’s Bay Community Fitness Trust under the watchful eye of Sir Graeme Avery and the six new courts coming to the PGA complex.

“The Sports Park is an amazing multi-use facility and along with the likes of PGA indoor sport complex and other sport facilities, it is the envy of other regions.”

The swimming complex is expected to be finished mid-2022. It will boast a 50 metre pool with a movable bulkhead that enabled the pool to be split into a range of configurations including two 25 metre pools.

It will also have a hydrotherapy pool and 25 metre learn to swim pool that can also be used as a warm-up pool for swim meets.

To gain Fédération Internationale de Natation (FINA) accreditation, the 50m swimming pool can only have a margin of error in length of just 5 millimeters. To ensure this is met, the pool is made from Stainless Steel, which is precision laser cut in the United States and welded together onsite, overlaid with a durable PVC membrane (pool liner).

“There’s a wave of construction projects and we’re very well placed to take these on as a ‘One Stop Shop’ fully integrated delivery solution tailored to the individual client.

“We get a huge buzz when we hand over new or redeveloped community facilities such as a sports complex. We know that they are going to be well utilised, especially by youth and that there’s many positive outcomes for the community.” 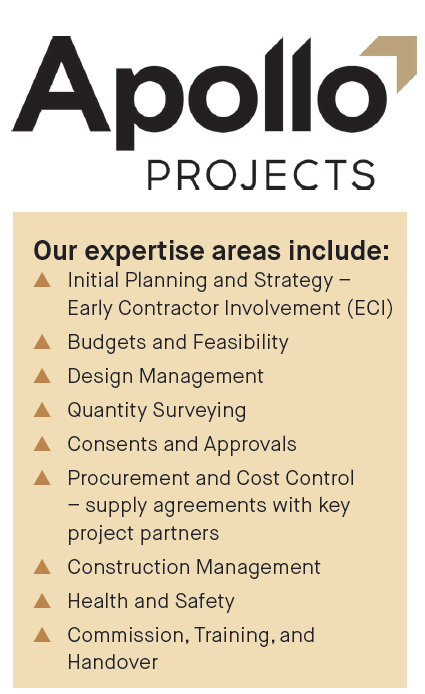