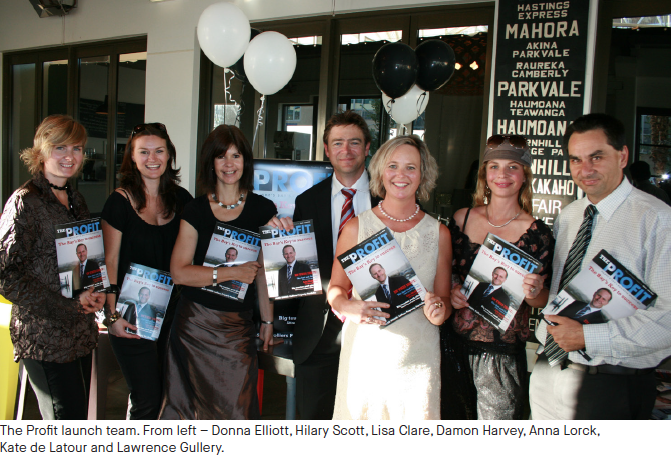 We wanted to unite the region. We made a bold statement that we would be representing a “fresh generation of local business people” and that we were over petty infighting between Hastings and Napier. Our first editorial headline announced: “Hawke’s Bay businesses now have a voice!”.

We went on to say that our team (four of us) was “committed, regardless of which city we live in or work in, which school we went to or our children go to, or which sport we play, to unite Hawke’s Bay. Hawke’s Bay is on the cusp – the world is ours – but we will never get there unless we are prepared to move in the same direction. The answer is black and white!”

The magazine may not have ever eventuated if it hadn’t been for Colliers Hawke’s Bay’s Simon Tremain and former director Jude Minor. Colliers was looking for a new publication to promote their property listings, so we collaborated and half the magazine featured commercial and industrial property listings.

On our first cover we went with the prime minister of the time, John Key. I interviewed Sir John at a café in Havelock North before travelling to Ahuriri where John Cowpland took our cover photo.

During the interview with John, I asked him about Air New Zealand’s monopoly on domestic air travel and the cost of flying out of Hawke’s Bay. During the last decade we have seen Jetstar come and go, first arriving as much welcomed competition that saw a huge increase in passengers through the airport as well as more affordable tickets. Unfortunately, in late 2019, Jetstar pulled out of regional flights and we’re once again left with Air New Zealand.

Back in 2010 John said: “We absolutely support competition on domestic and international routes. I’d encourage people in the Bay to let Air New Zealand know what they think of the current airfare deals.”

It looks like that’s what we need to do now!

In our first issue we also had a page on construction projects that were underway. These included the Regional Sports Park grandstand; the expressway extension from York Road in Flaxmere to Longlands Road; the Hawke’s Bay Museum and Art Gallery; and a proposed business park in Ahuriri.

We’ve profiled these projects and many others upon completion over the last 10 years. In November 2018, we featured $600 million in construction projects across the Bay. 26 major builds including the just completed rebuild of the Hawke’s Bay Opera House, which is featured in this issue.

One of the longest-running stories over the decade was the potential amalgamation of our five councils. The first story appeared back in 2010 and in 2015, the residents of Hawke’s Bay finally got to vote.

The outcome was a resounding ‘NO’ to amalgamation. In our view the business community was for a merger, but it wasn’t to be with the residents of Wairoa, Napier and Central Hawke’s Bay voting against it.

As we look back over the past 10 years, there’s a lot we can be proud of. The magazine continues to prosper thanks to many local businesses that advertise in the magazine.

We have profiled hundreds of businesses and business people and overall the magazine has enhaced the vibrancy of the business community.