A Hawke’s Bay business that plays a big role in putting other businesses up in bright shining lights, prefers to keep a low profile.

Axis might not be well known within the Hawke’s Bay scene in general but they are the ‘go to’ business for sign writers nationwide through to boat manufacturers and everything in between.

So, what do Axis directors Russell Thorogood and Leon Pryce and their team of 13 actually produce?

Essentially Axis can take a flat sheet of alloy, plywood or plastic (or anything) and with a CNC router or CNC laser create 3D building signage, shop fittings, engraved award trophies or componentry for the building and engineering sectors. In fact, they can pretty much do anything with a flat sheet of material!

“We can do anything from door plates to all sorts of signage, boats along with props for the film industry. We can do individual letters or numbers as small as six millimetres through to boat panels as large as six metres,” says Russell. 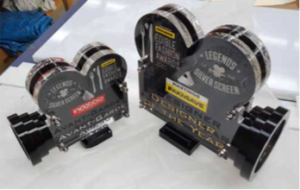 In the early days when they were on the hunt for work, they got the opportunity to profile cut and manufacture the rear end of an Americas Cup yacht with an interactive grinder that was used as part of a promotional campaign for the America’s Cup in the early 2000s.

Another early break was supplying all the signage for the redeveloped Waikato Stadium in Hamilton in 2002.

The business first set up in what Russell says was “pretty much a shoe box” in Duchess Crescent in 2001 and has grown and moved several times to now be in a purpose-built facility in the Irongate industrial zone.

“We started out in a room that was 20 m2 and now we’ve got this fantastic facility that is about the size of eight basketball courts, with room to expand.”

Axis was previously in an industrial park alongside Furnware in Omahu Road – a facility that they needed to expand twice.

“I remember when we first moved in and we had 600 m2 and I thought we would never fill it; but five years later, we doubled our space and now we’ve moved again,” Leon says.

Russell and Leon identified early the type of business they wanted to create and who they would target. They didn’t want to deal with the end user but instead wanted to be a supplier or intermediary to an overall business sector.

They initially targeted sign writers nationwide, with Russell getting in a car and driving the length and width of the country showing what they were capable of.

Some of the clients secured in those early days remain with them today as well as many others that email daily designs that they want to be brought to life using a vast range of raw materials.

“We’ve also been involved in the development of unique products that someone has invented. They will come to us with an idea, we’ll do a prototype, tweak it and depending on its success, we’ll continue to supply.”

Axis has been a supplier to one of the world’s largest technology companies for many years. Russell says they built a strong relationship with Vectek Electronics (which was bought by ABB) early on supplying labels that went on electronic equipment to now, manufacturing and supplying many parts that go into ABB equipment.

“Our focus has always been on quality and service and that’s helped us compete well against other CNC businesses.

“Our aim is to quote, produce and deliver to, say, an Auckland customer faster than if they had someone like us just down the road.”

Axis now employs 13 staff and has heavily invested in technology and software. The business has four CNC routers and two CNC lasers.

The one-hectare Irongate Road site is powered by solar energy, with one of the largest double-sided solar commercial installs in New Zealand. Solar generates enough electricity to operate the complex throughout the day and then some.

“While we were in the early stages of building this facility, I visited some buildings in Australia and we could see the cost and environmental benefits immediately. Solar is the future.”

The next route for the business looks exciting. Leon and Russell, with involvement from the team, are always looking to drive the business into the future. 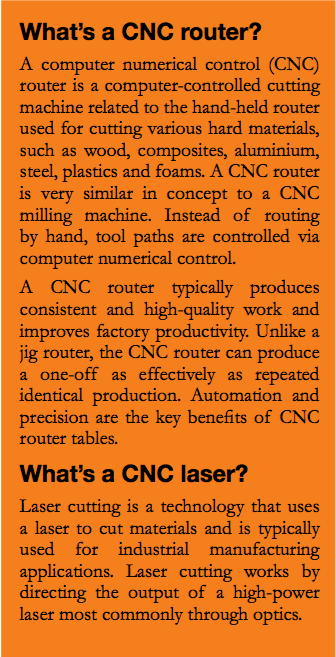