The construction industry is booming in Hawke’s Bay. It’s at unprecedented levels both in large-scale commercial projects as well as in the residential housing sector.

In the November 2018 issue of The Profit we estimated there is about $600 million worth of commercial construction projects either currently underway or set to commence. Over and above this is the housing boom, up 38 percent on last year.

Construction companies and other trades-related businesses have full books. It’s an enviable position but while businesses like Gemco have had a hot run with major builds such as the Hawke’s Bay Opera House, Hastings Health Centre and Delegat winery, a pinch point is having enough skilled labour.

However, Gemco is doing something about it. With a 140-strong workforce, Gemco managing director Darren Diack says they generally have over 20 percent of their staff made up of apprentice builders, plumbers, electricians, painters, plasterers and joiners, to ensure they are future-proofed. 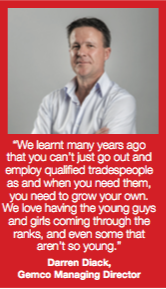 “Some will stay on once they are qualified and some will leave; and more importantly, some will become leaders within Gemco. Regardless, we are proud to be contributing to the growth of tradespeople in Hawke’s Bay,” Darren says.

As Gemco’s general manager Chris Olsen says, “when you’ve got a large engine to turn, it’s important to focus on the future”, and the Havelock North-based business maintains a steady stream of apprentices progressing through the ranks.

Gemco currently has 35 apprentices at varying stages of their three- and four-year apprenticeships. The current crop includes

Chris says they finish their time with a wide range of skills and experience, due to the wider exposure to all the trades within the business as well as the variety of commercial and residential work.

“They pick up a range of skills from their more experienced workmates, as well as getting a varied perspective from other trades,” Chris says. “They are the future of the business and we offer a really good learning space with a wide variety of projects that we have on the go at any one time.”

Chris adds that the mature adult apprentices have decided to take the step up from labourers or tool hands due to the current demand for qualified staff and the opportunities that arise.

Brent McAsey, who oversees the development of the budding tradespeople, says back when he was doing his time, getting into a trade was usually the career path for academic underachievers who didn’t go to university.

“However, that’s no longer the case. Apprentices may start on an hourly rate just above the minimum wage but they are not racking up debt as a student and there are strong career pathways within our sector,” he says.

Gemco, which was formed 18 years ago, has former apprentices who have worked their way up through the business as well as some who have gone on to start their own business or use their experience as a platform to other career options.

Apprentices like Jade and Harry (featured in our supporting story) spend 44 hours on the tools each week working towards achieving the practical components of their qualification, as well as completing theory education via the EIT School or Trades and Technology or BCITO.

“They can go as fast or as slow as they like in earning their unit standards but they work a full week on the tools,” Brent says.

Apprentices at Gemco are also given the opportunity to take on more responsibility as ‘Site Safety Reps’ on larger construction sites; undertaking site inductions, safety inspections and providing support to the Site Foreman.

Chris adds that the benefit of working at a larger construction firm is the exposure to a mix of large-scale construction and smaller domestic projects, as well as learning from many experienced tradespeople.

He says a big issue going forward is the pending demise of the 90- day trial period, which has enabled the business to give someone a go who may not have had the strongest CV.

“It will hurt our industry [the loss of the trial period] as firms like ours probably won’t take the punt on someone who we have a slight doubt over. We just won’t take that risk as we have in the past and that’s sad, as many of them go on to become very good tradespeople.”

Chris, who served in the army, says there’s many similarities between the armed forces and the trades industry.

“It’s [trades] similar to the army in that there’s a lot of comradeship, especially within a large firm like ours where you create long-lasting friendships. Also, your skills are transferable to other jobs.

“There’s also a lot of interaction with the other trades and you inadvertently learn skills from your peers,” Chris says.

Recruiting and maintaining apprentices is an ongoing challenge and learning curve for Chris and Brent, who admit that the old way of leadership no longer cuts it with the Generation Z.

“We have to be smarter and understand where they have come from and where they are going. Youth do have a different attitude than our generation, especially with the influence of technology.

“It’s important that they have an attitude of wanting to be here and wanting to succeed.” One of Chris’s life learnings is: ‘You just have to want it bad enough and the rest you can be taught’.

“We want everyone to have the attitude of giving everything a go and giving it everything they have got, and then if it doesn’t work out, just learn from it. One of the best ways to learn and some of the most important pieces of advice we give them is don’t be afraid to fail, and if you’re going to do something, don’t be afraid to ‘fail big’.

“It’s about learning, growing, taking risks and producing the very best we can for us and them and the future of our industry.” 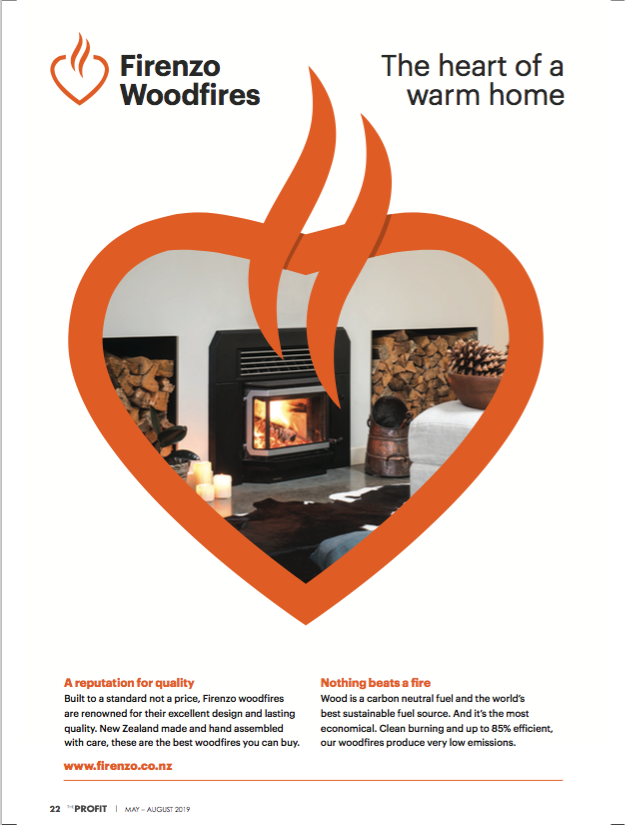