Katie Nimon has been working in her family business – Nimon Luxury Passenger Transport – since she was 14. Now she’s been recognised as a leading influencer for Hawke’s Bay tourism.

When this year’s Hawke’s Bay Tourism Awards were announced in September, Katie Nimon was honoured with a special individual accolade that seems very appropriate: Ambassador for Tourism in Hawke’s Bay.

It’s a reflection of more than just of her role as a key player in the local tourism industry; she’s been championing the Bay for years.

“When I was working in advertising in Auckland (about three years ago), my workmates used to joke about me being the ambassador for Hawke’s Bay,” she chuckles.

“Back then I used to talk about Hawke’s Bay so much – telling everyone to pay it a visit, how it was a great place to go on holiday, or just for a weekend – maybe they foresaw the award, I don’t know!”

In January this year, Katie was appointed general manager of the family business, Nimon Luxury Passenger Transport, where she works with her father and managing director Bill Nimon, mother Sue (administration manager) and uncle Garth Nimon, who looks after the company’s school runs. 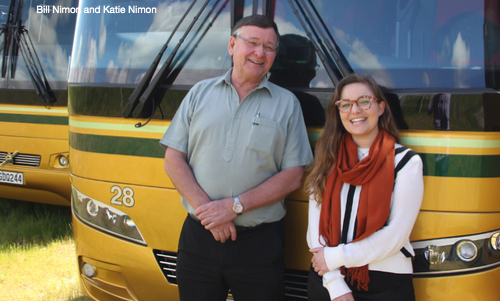 Katie, 27, is the fifth generation of the Nimon family to work in the business and she’s been part of the company since she became a part- time staffer at the age of 14.

“I definitely started at the bottom. I was spending most of my time answering phones, filing paperwork and stamping envelopes. Basically, doing everything that no one else wanted to do.”

After leaving school, she studied advertising and marketing at Massey University, finishing with an Honours degree. But the family business has never been far from her mind.

“When I was 18, before I went off to university, I redesigned the logo to what it is now,” she says.

“Then, during my time at university, any free time I had – holidays and the odd weekend – would be spent working in the business, learning every single role that we have. I was doing the charter work, some marketing and PR, covering accounts when people were away, looking after operations.

“That was probably the best learning experience I could have. During that time, we were slowly starting to refine the brand and polish up what the business actually means, so I was effectively working on the brand identity that whole time.”

After completing her studies and spending time working in Auckland, Katie headed back to Hawke’s Bay in 2015 to take up the role as marketing manager at Nimons (as it is fondly known).

“The sunshine called and I followed,” she says.

“When I was younger I’d always wanted to work in advertising, and that’s what I studied and had the opportunity to do, and it was amazing; but the more time I spent away from Hawke’s Bay and away from the family business, the more I realised that was what I wanted to do.”

Then, in January this year, she became general manager, replacing long-serving GM Pete Patterson who had moved on.

“We looked at it and thought, yes, okay, I’m young, but on the other hand, who knows the business as well as I do?”

As general manager Katie retains the marketing role, which she says makes sense because it’s a business where marketing is at the core of what the company does.

“Everybody should be thinking with a marketing mindset, so it made sense that I continue doing what I was doing as marketing manager. In this industry the role is about marketing ourselves and the region as well as about relationship building.

“What’s really important is that you have good relationships with other operators and venues and members of the public. If other businesses don’t believe in what you do, then no amount of marketing is going to help because they are the advocates – they’re the ones who suggest to their customers that they should use your services.”

If taking up the GM role wasn’t enough, Katie is also back studying extramurally, working towards an MBA through Massey University.

While it’s keeping her very busy, she says she’s enjoying complementing what she’s learning through practical work in the business with what the MBA is teaching her.

Over the past three years, and following on from the earlier rebranding work, Katie’s work in the business has included introducing the Nimon Luxury Passenger Transport brand.

While not all aspects of the business are focused on ‘luxury’, she says the branding reflects the fact that a large portion of its operations is focused on the higher end of the market.

It’s a positioning Bill first identified when he realised several years ago that vehicles with high specifications were what the industry was demanding, and what could set Nimons apart.

“We had competitors in the region doing the ‘basic’ approach, and even though at the time there wasn’t a lot of high-end tourism, that’s changed and the arrival of destinations such as The Farm at Cape Kidnappers have brought a different type of business to Hawke’s Bay,” she says.

“Likewise, with the arrival of high-end cruise ships and growth in the number of touring groups and individual travellers looking for a top-quality experience, we’ve been ready for that change in the market, rather than waiting for it to happen and then responding to it.”

But Katie says the business – and the tourism industry in general – can’t afford to focus solely on high-end travellers.

“I think there’s a place for every kind of business and every kind of offering. We talk to people regularly who want our advice on how to get into the cruise market or tourism in general and we tell them the most important thing is offering something for everybody.

“We’re very aware that we’re not in Auckland, where you might be able to be top-end-only and still be successful. But if we only offered top-end services here, we wouldn’t be busy all the time.

“I was recently talking to a new operator who was interested in targeting the top end and I told him you don’t want to discount the backpackers because they still have money to spend, albeit not as much.

“It doesn’t mean that everybody shouldn’t offer quality and I think that’s completely different. If you are offering an affordable, accessible product, it still needs to be high quality, it just might not have all the bells and whistles that a top operator might have.”

She says the industry should always have in the back of its mind that today’s backpackers and freedom campers could potentially return to New Zealand as tomorrow’s luxury travellers.

Cruise ship passengers, who might only spend a few hours in the region, should also be thought of in the same way.

“People on cruises might be here for six hours. It’s not long and often they don’t spend much money in the region, but we’re here to put our best foot forward and give them a great experience. Then they’ll come back, bring their families and stay for a week – that’s what we want and that’s our opportunity.

“That’s how we’ve got to treat any visitor – the potential for more. A backpacker may come here freedom camping but in 10 years’ time, when they’ve got money to burn, they might come back and stay in luxury accommodation.”

One of the challenges for Nimons, she says, is it represents two industries – transport and tourism – which often have conflicting requirements.

“The thing is not to put yourself in one box, because if we had put ourselves only in the transport industry box we wouldn’t have even considered the possibility of seeking Qualmark Gold certification. But because we’re also a tourism operator and we see the value of respecting and protecting the environment and making sure we are role models for our visitors, we went for it.

“We tried really hard to offset our carbon footprint and we achieved Qualmark Gold status. As a tourism operator that’s not uncommon but as a transport operator, it is. We’re one of only two coach companies in the country to achieve it.”

Nimons is a business where there’s a constant need to ensure the customer experience is unique, says Katie.

“It’s the personality of the driver and that feeling that customers have when they get onboard one of our vehicles. That’s what you’ve got to keep in mind every day. It’s more than just getting someone from one place to the next – because anyone can do that – it’s what you can do differently.

“The most important thing is thinking more about the experience than the product. The product is the bus and the experience is what you do with it. You can have the world’s nicest, most modern vehicle but if you’ve not got the entirety of the service at that same level, it’s not going to be a complete experience.”