Hawke’s Bay has the potential to supersede the likes of Auckland, Hamilton, Tauranga, Wellington and Christchurch as the premier sport facility region of New Zealand.

In fact Hawke’s Bay can probably already lay claim to the title, but with over $60 million of new sport facilities at the Regional Sports Park (Mitre10 Park), Pettigrew.Green Arena (PGH) and a high performance training facility for Hawke’s Bay Rugby, the region is punching well above its weight.

At Mitre10 Park, sports already present include athletics, hockey, rugby, football, league, canoe polo, fitness centre, Crossfit, basketball and netball and they will be joined by swimming, water polo, cricket and boxing as well as a 40 room hostel.

Just several kilometres down the road at Taradale’s Pettigrew.Green Arena (PGA), indoor sport codes such as basketball, netball, badminton, volleyball and futsal will enjoy the increase in court space to 11 courts.

The region will now be able to host multi-day major regional, national and possibly international sports events at each facility separately or together with the ability to bid for events like National and International Masters.

This will bring in athletes, supporters and increase visitor spending which will boost the region’s hospitality and retail sectors.

Sir Graeme Avery, chairman of the Hawke’s Bay Community Fitness Centre Trust which has led the development of over $50 million in sport facilities at Mitre 10 Park in Hastings the infrastructure investment in international class facilities, along with existing ones, will not only place Hawke’s Bay as a first choice for major domestic and in the future, international sports events, but also in leading the country in programmes delivered at the facilities for sport development and for the health and mental wellbeing of the community.

“Development of new indoor facilities for cricket, boxing, Olympic climbing, gymnastics and beach volleyball, along with synthetic tennis courts at Mitre 10 Park as well as a yachting and water sports development hub in Ahuriri.

“All these proposed new facilities will complement the current investments and cement Hawke’s Bay as unrivalled in New Zealand for the scope of its sport and recreation facilities for the community and for hosting major sports events,” Sir Graeme says.

He says the trust aims to achieve a major sports event in the region every month and is developing a strategic plan to work with HB Tourism and Councils across the region to bid for major multi-day and multi-sport events. 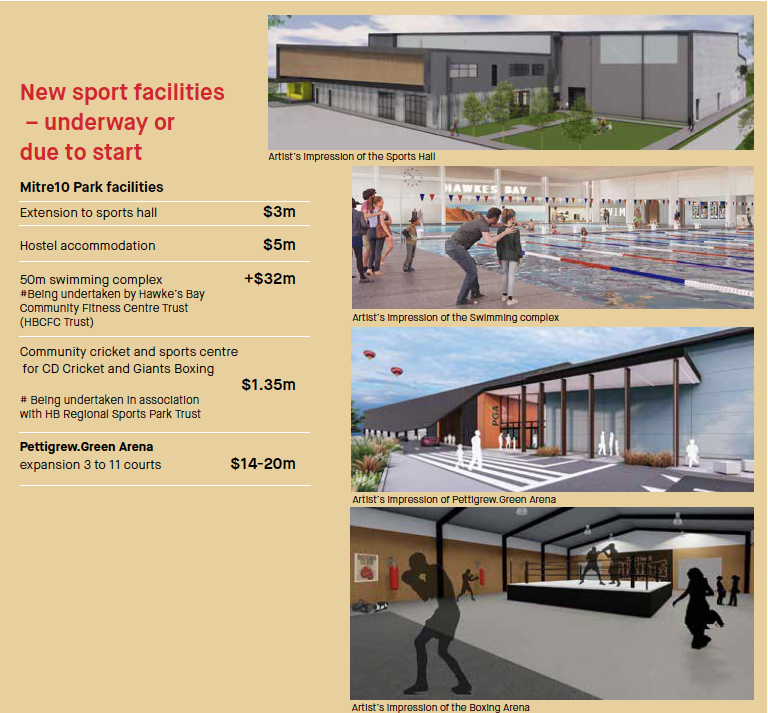 Mitre10 Sports Park chief executive Jock Mackintosh says the facility has the best athletics venue in New Zealand consistently rated a 9 out of 10 when surveys are undertaken during major events.

“Increasingly we are getting the attention of Athletics NZ that regularly send their athletes here for training camps and in 2021 and 2022 we will host the New Zealand Athletic champs.”

For Pettigrew-Green Arena Regional Indoor Sports and Events Centre Trust chairman Craig Waterhouse the focus of redeveloping the indoor sports centre from 3 courts to 11 is well over due with increased community participation in sports such as basketball and Futsal driving the need.

“Over the last ten years, there has being a massive shift in youth sports participation from grass-based sports to indoor sports.

“Basketball is now the number one secondary school sport ahead of rugby and soccer. Indoor soccer (Futsal), which did not exist in New Zealand, as a sport when they built the original arena, cannot grow as they have no facilities, volleyball has increased by 100 percent in five years and netball is requiring more indoor court space.”

He says if facilities don’t meet the demand, there’s a risk to the health and well-being of youth.

“Users are demanding more and more courts space; the lack of space affects the health of our children – they are not moving back to grass-sports they are simply not participating in sport.

Craig says sport and recreation is not just about winning, it’s about helping build stronger, healthier, happier, and safer communities.

“The increase in the scale of the Pettigrew Green Arena will have a massive impact on the future health of our society, probably the single most significant opportunity we have ever had to impact on our children’s future.

Graeme fully agrees with the sentiment that the investment  “There will be undoubted social and economic benefits for the Hawke’s Bay community. The new and enhanced facilities will provide jobs to the local construction sector in an important post-covid recovery phase. Sport is the ‘glue’ for creating social cohesion in a community – as very well evidenced when community sport resumed in level 1 of covid-19.”

Sport Hawke’s Bay chief executive Mark Aspden is also on the same page that the investment in new sport facilities will overcome availability issues due to increased community participation in some sports.

“The investment is enhancing the opportunity for our local community to be able participate in the activities that they want to engage in. For example there has been a shortage of indoor court space for several years and the PGA expansion will go a long way to addressing that.

“With the EIT Institute (and particularly with the addition of the Indoor Aquatic Facility) we are able to ensure that young people in the region will have similar, and in some cases better

opportunities to develop their talents as those in the major centres.

From a Sport Hawke’s Bay perspective getting more local people active more often is its primary focus but the new facilities will attract major regional and national events.

“Community participation has to be the main focus, but hosting events can be the icing on the cake.  It isn’t as simple as ‘build it and they will come’ but by having these facilities we have a much greater opportunity to host bigger events.”

Craig says PGA will be in the top 10 percent of indoor facilities in New Zealand and will be able to host national events, especially at secondary school and age group levels boosting accommodation providers and tourism businesses.

“With five additional futsal courts, 8 new basketball courts, over 40 new volleyball and badminton courts and 8 new indoor netball courts we will be able to host National Secondary and age-group tournaments.

“This will be a significant boost over winter when tourism in the Bay has fewer visitors. We estimated 10,000 additional visitors, an increase in regional GDP of $3M.

Mark says the portfolio of sport facilities in Hawke’s Bay coupled with our climate will be unparallel in New Zealand.

“Alongside our climate which is well suited to year round outdoor activities and tracks which create opportunities for walkers, runners, cyclists and mountain bikers to be active, there are obviously plenty of options for residents and those from other regions to engage in physical activity.

As the region continues to grow its sport facility assets Mark is keen to see the regions councils review and update a regional sport facility plan that was last signed in 2015. Only one mayor – Wairoa District Council’s Craig Little remains as a signatory.

There is strong evidence that Napier and Hastings  council’s are more focussed on collaboration as well as ensuring there’s less duplication, but it’s time for an updated regional facility plan involving all five local authorities.

“They’re working together in an extremely co-operative manner in relation to sports facilities.  In light of that we have a great opportunity now to ensure that a regional plan is put in place and actioned, which provides the basis for the future development of facilities in a way which best meets the needs of the region. 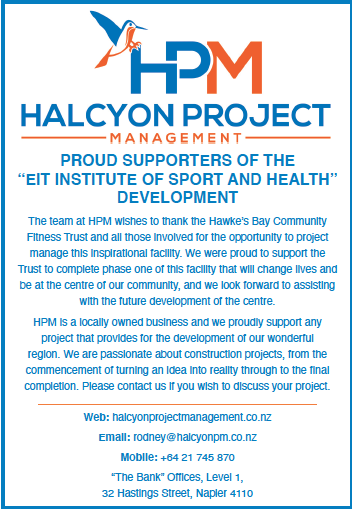