If reducing carbon emissions wasn’t a goal for your business before 2022, it certainly will be now, since the New Zealand Government released its first Emissions Reduction Plan (ERP) in May.

Hawke’s Bay has felt the impact of climate change with a severe drought in the summer of 2020/21 and then major rain events along the East Coast during our most recent summer.

The drought impacted our farming community, while the rain and humid weather took its toll on the wine, apple and cherry growing sectors.

As local business owners, we know a poor harvest season sends economic ripples throughout the community as smaller crops and inferior produce hit profitability and wallets are tightened.

The ERP is the government’s move to place greater responsibility on businesses to take measures to reduce their environmental footprint, including setting emission reduction targets for specific sectors.

Emissions from energy and industry sectors make up 27 percent of total emissions and the plan will lead to estimated emissions reductions during the first budget period of:

The policies will be backed by $2.9 billion in proceeds of selling carbon credits to polluters under the Emissions Trading Scheme over the next four years, and Hawke’s Bay businesses can apply for funding support to launch their decarbonisation journey via the Government Investment in Decarbonising Industry (GIDI) Fund.

The fund has had a cash injection due to the launch of the ERP, jumping from $69 million to around $650 million to partner with major process heat energy users and help them cut costs as well as emissions.

The ERP announcement also included targeted investment at a regional level for projects that optimise low emission fuel use; funding for electricity transmission and distribution infrastructure upgrades to support fuel-switching; and the early adoption of high-decarbonisation energy technologies.

The original fund is regarded by government as a huge success funding fund 53 major industrial decarbonisation projects and estimated to save 7.46 million tonnes of carbon dioxide over a lifetime – the equivalent to taking 134,800 cars off the road.

Wool scouring business WoolWorks was one of the first to get GIDI funding, convert gas and oil boilers to efficient hot water heat pump technology – see story on page 11.

Unison powers up to meet business demand for decarbonisation initiatives

Already in Hawke’s Bay, power lines company Unison is providing support to some large processing and manufacturing businesses and is anticipating an increase in interest by other local businesses looking to reduce their reliance on industrial processed power, such as from coal, oil or gas boilers.

“From an electricity perspective, the direction of travel is very clear. Electricity is going to do a lot of the heavy lifting in terms of decarbonisation of transport fleets and converting industrial processes – especially those that rely on coal, oil or gas boilers – to electricity,” says Unison general manager commercial Nathan Strong. 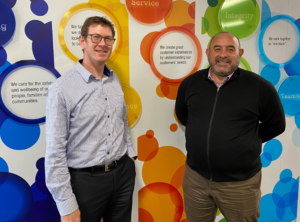 “To the credit of many local businesses and industry, they have been thinking about de-carbonisation for the last three years, and maybe longer and we have already had a few knocks on the door in terms of our customers wanting to look at options to decarbonise as well as get an understanding of infrastructure impacts of any transition.

Unison relationships manager Danny Gough adds that the types of businesses introducing decarbonisation initiatives is very diverse but mostly include those within the production and manufacturing sectors who are looking to get away from utilising thermal heat.

Danny says businesses aren’t just looking at reducing their carbon footprint as ‘doing their bit’ to improve the environment, but also as part of their growth strategies and promoting their sustainability actions.

He says Unison is working closely with those organisations and their consultants to support their decarbonisation aspirations and sustainability goals.

“Our role is to provide relevant information and advice on fitfor-purpose optimal electrical solutions, and to assist them in determining their electrical requirements and the upfront and ongoing costs associated with infrastructure upgrades.”

Nathan says the GIDI Fund offers a major opportunity for local businesses as they consider how to fund their emission plan.

“The government has injected 10 shots of adrenaline in the arm with the fund, which will get businesses thinking about how they can afford the cost of accelerating the likes of a boiler replacement, so one of the challenges for Unison will be to manage demand from businesses that want to get underway quickly.

“Our message is, talk to us early or risk joining a queue at some point in terms of getting the hardware and the infrastructure in place.”

The Hawke’s Bay Regional Council has launched a Hawke’s Bay Climate Action Network for businesses, a shared platform for peer-to-peer learning for businesses committed to reducing emissions, which will feed directly into council planning.

It meets every six weeks to discuss emissions reduction, sustainability and adapting to the changing climate.

The council is also aiming to launch its Regional Climate Action Plan by July 2023, outlining how the council will be carbon neutral by 2025 and the region by 2050.

The network and plan is being led by the council’s first climate action ambassador, Pippa McKelvie-Sebileau. 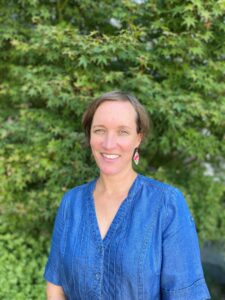 Pippa says climate change is already impacting our way of life, from being able to swim in the waterways we love to where we live around the coast.

“Successful adaptation to climate change is not only essential for economic resilience of our region but also for the wellbeing of our communities.

“This role is about climate action. The Hawke’s Bay Regional Council already has an excellent science base and team of scientists, so it will be about turning that knowledge into practical solutions for our community.

Pippa says the ERP offers businesses and organisations a significant financial commitment to support the transition to lower emissions activities.

“This plan marks the first steps to create the conditions we need for a long delayed journey towards a fairer low emissions and a more secure future for everyone.”

“Farmers are crying out for solutions to help them lower their agricultural greenhouse gas emissions and respond to a warming climate, so the investment and acceleration of research and development is welcome.

“But we cannot rely on breakthrough technology solutions to reduce emissions by the rate they need to be to keep warming under 1.5 degrees.”

“There is also no funding to retrofit houses with better insulation to reduce energy needs and make homes healthier, and it would be good to see a focus on shifting economic paradigms to support more sustainable models with lower inequality and greater social cohesion.”

Hastings-based business and sustainability programme developer 3R introduced a carbon reduction plan in 2014, and reduced its greenhouse emissions by 32 per cent (129 tonnes) in the first year, surpassing its goal of 20 per cent by 2020.

3R chief executive Adelle Rose says much of the initial reduction was largely achieved by opening a depot in Christchurch, which meant material it collected in the South Island was no longer sent to the North Island.

“The following year we went a step further and gained carboNZero (now Toitū net carbonzero) certification through Toitū Envirocare. This certification isn’t simply about measuring emissions and offsetting them through carbon credits, but rather identifying and taking actions to reduce emissions.”

Adelle says with freight being its largest source of emissions, 3R constantly reviewed travel routes and alternative freight service options, overlapping collections and where possible collaboration across stewardship schemes. Efficiency in these aspects helps drive down our emissions even as we grow the volume of materials we collect for recycling.

“However, our next step to reduce emissions is a big one – changing our fleet to low-emissions options – and this requires significant investment along with infrastructure to support it, which isn’t necessarily available nationally at present.

“This means we need to focus on small incremental changes that can help such as minimizing employee travel, using other Toitū net carbonzero certified suppliers like power provider Ecotricity, driver training and regular vehicle maintenance, improving web conferencing technology, and staying on top of our organic waste to landfill.”

Adelle says 3R is the only Hawke’s Bay based member of the Climate Leaders’ Coalition , which has a highly ambitious commitment to accelerate our transition towards a zero carbon and resilient future.

As part of commitments, 3R is also starting to work with staff and suppliers to reduce their emissions.

Adelle says the ERP is a step in the right direction, adding its mostly up to government and industry to do the hard yards in tackling climate change.

“While the actions of individuals to tackle human contribution to climate change are important, the most impactful and far-reaching are those taken by government and industry. It’s therefore significant that the plan released by government sets out a way forward for reducing the country’s emissions but shows that climate action is the new business as usual, as well as showing New Zealand’s leadership on the issue on the global stage.”

Going forward, Adelle is looking for a greater partnership between government and the private sector with the introduction of an advisory group.

“For us and our work designing product stewardship schemes, partnerships are essential, and we would have liked to see a closer relationship between government and the private sector when developing the plan.

“Government still has the opportunity to improve this aspect as it moves forward with the implementation of the plan.

An advisory group that allows the private sector to have its voice heard and included in the conversation would be very welcome.”

The ERP also offers 3R an opportunity to help other businesses in Hawke’s Bay and around New Zealand by introducing new product stewardship programmes, such as a new recovery programme for synthetic refrigerant gases – one of the most potent greenhouse gases, thousands of times more so than carbon dioxide.