In August 2019 the first of three stages of the Hawke’s Bay Opera House Complex will reopen to the public, after it was closed in 2014 due to earthquake risk.

The estimated $30m Hastings District Council Project is part of a major overhaul of the Hastings CBD and could well be the catalyst for additional developments including a hotel. 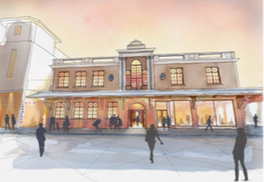 “The strengthening of the opera house theatre has gone very well and is on time. There’s been a slight delay with the Plaza but that was to ensure that the multi-purpose venue had the right roof structure and we’re now consulting with the public on what they would like to see the municipal buildings used for.

“Early feedback is that they are very keen to see it being a mix of commercial use, such as hospitality, as well as community usage,” she says.

The Hawke’s Bay Opera House was built in 1915 in the style of Spanish Mission. Both the opera house and neighbouring Municipal Buildings (built at about the same time) carry Heritage One status.

The proposal includes a plan for the laneway between the Opera House and the Municipal Building – with ideas including making it a ‘light path’.

Gemco has painstakingly strengthened the Opera House via a process which saw each of the 100-year-old unreinforced earthquake-prone brick walls encased in steel rod mesh, which is ‘pinned’ to the brick with reusable plastic boxing then erected and concrete poured into the recess. That results in an average 300cm- thick wall of concrete, laid up against the old bricks.

For the Opera House precinct’s project manager Herman Wismeyer of Focus Project Management, there was a strong desire to be involved in this legacy and iconic redevelopment.

Having grown up in Hastings and performing on the Opera House stage, Herman wanted to lead the project, which would create a complex for the next 150 years.

When the redevelopment was first mooted Herman was working as a project manager for Opus in the earthquake ravaged Christchurch, but he packed his bags and door knocked on the council in the hope of being involved.

“This is the key building of the district. It’s the heart of Hastings and it’s been closed for too long.

“After a rigorous procurement process which involved successfully responding to a RFP, Focus was appointed as the lead project management company.

He’s pulled together what he regards as the “A team” that when the project is full completed, they will all be incredibly proud of what has been achieved.

“It’s an all local team and it’s what I regard as a high performance team that could now go on to any project and have the same success.

“Everyone’s mana is on the line and we’re determined not to disappoint both the council and the residents of Hastings. The project certainly has had its challenges but we’ve all met them head on and it keeps ticking over,” Herman says.