Mark Matthews retired as a veterinarian earlier this year after 44 years of travelling on dirt roads to the back blocks of Hawke’s Bay and other parts of the Central North Island.

Mark grew up on a farm in Poverty Bay but rather than becoming a farmer, he set his sights on being a vet – and a pretty good one, too.

Mark studied at Massey University in the early 1970s and upon graduating he moved over the hill to a vet clinic in Pahiatua, where he came under the mentorship of Bruce Farquharson. He spent five years learning off Bruce before moving up to Hastings to establish a practice for Vet Services Hawke’s Bay, an ambitious practice that started as the Central Hawke’s Bay Vet Club in 1949.

“Bruce played an important role in my career and was a fantastic mentor, especially in the area of production animal health.”

Mark, his pregnant wife Diane and two young children packed up and moved to a new exciting opportunity to establish Vet Services Hastings in 1980. Over the next 30 years, he would see the small clinic with one vet grow to a large-scale companion and working animal clinic with 14 vets, a large support team and a strong retail presence.

Mark built a strong reputation as a problem- solving vet on many farms across Hawke’s Bay, as well as earning a reputation as a leading authority on production animals that culminated in him being the latest recipient of the Alan Baldry Award this year for his contribution to sheep production.

Over the years he also became much sought after for his expertise in sheep and cattle health and productivity, presenting at many conferences in the United Kingdom and Australia. He was also involved in the early development of artificial insemination for sheep reproduction.

However, his greatest achievements are on the farm, where he’s helped minimise the outbreak of deadly animal diseases along with developing animal health plans for farmers.

“We deal with disease outbreaks all the time and I recall many years ago a farmer had all these yearling cattle dying and it looked like they had been poisoned – there was dead cattle everywhere.

“We did some autopsies and found out it was a major outbreak of worms and it was a set of circumstances that saw many of them die in a short period of time, which at first made us think they had been poisoned.”

Another interesting problem Mark and his team solved presented itself in the early days of dairying. The dairy cattle were dying and the farmer called in a nutritionist and Vet Services.

“They were all anaemic, they had no blood. The nutritionist couldn’t work it out but we gathered the information, pieced it together and worked out what was happening – it was a lack of phosphorus in the feed. We traced it back to the farmer providing supplementary feed that was coming from a food processing plant.”

The biggest farm production change Mark has seen over his career has been the introduction of international sheep genetics, which he says was a “major game changer”.

“All of a sudden you had sheep that produced two or three lambs, where New Zealand sheep at the time were only producing one and, only sometimes, two.

“Genetics has played a big role, as has on- farm practices. There’s been a lot more intensification and farmers have become much more ‘scientific’ than they used to be. They take a much more measured approach and some farmers are just amazing with what they are doing on their farms.

“When I first graduated, farmers would have been lucky to grow 8,000 kilograms of dry matter a year yet now top farmers are growing 15,000 kilograms, which can be attributed to farming techniques and genetics in the feed.”

Mark says the other key change was the end of livestock incentives when farmers were “paid to have sheep and beef”.

“That all went under Rogernomics and for the better as well, as farmers are now farming for a profit, not incentives.”

In recent years the spotlight has been placed on farmers and the environmental impact of farming. Mark says that generally farmers have been unfairly tarnished when it comes to their environmental footprint. 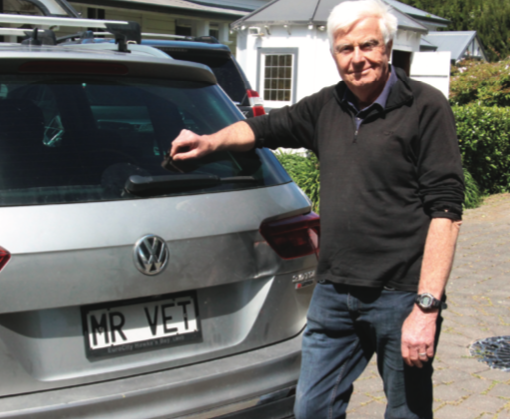 “Most farmers are very environmentally aware of what’s happening and are doing a lot; I don’t think the general public realise just how much they are doing.”

However, he says dairying could still be less intensive.

“It’s only my theory but farmers should only have enough cows that they can feed from what is grown on the farm and I think if you did that, you wouldn’t have any problems at all.

“But what happens is that they might have 30 percent more cows, and that means they have to bring in 30 percent more feed. Then you have all the problems of the extra nitrate coming out of the cows that adds pressure to our soils and waterways.”

Mark says he misses visiting the farms and catching up regularly with his farming clients and he has a word of advice for the modern- day vet:

“Some vets don’t get outside of the cattle yards but you need to get out and drive around the farm so that you understand the problems of the farm. You might work out a plan on how to do something but it might be physically too hard to achieve because of the terrain or lack of facilities on the farm, so it’s really important to get out on the farm and understand the full picture.”

Mark was also instrumental in the growth and success of Vet Services, which now has clinics in Masterton, Dannevirke, Waipukurau, Hastings and Napier.

He became an owner of the Hastings practice and was chairman of the board for about eight years. As he sits back in retirement, the only part of his job he doesn’t miss is being on-call.

Now in retirement, Mark and wife Cath plan to hitch up the caravan a bit more, spend time at the holiday home in Taupo as well as keep fit swimming and mountain biking.